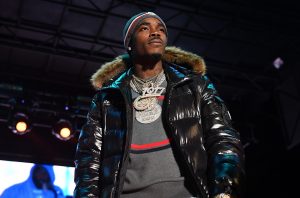 Over the past year, we’ve seen the rise of what Guwop calls The New 1017. The label released their collaboration album in 2020 as an introduction to the world. It then followed by the breaking out of Memphis rapper, Pooh Shiesty.

He dropped his debut project, Shiesty Seaso, back in February, leading with the hit track, “Back In Blood.” The Lil Durk-assisted song peaked at No. 13 on Billboard Hot 100 charts. In addition to Pooh Shiesty, the labels revitalized roster consist of Big Scarr, Enchanting and the now-incarcerated Foogiano.

It was reported on Monday (May 3) that Foo was sentenced to five years in prison after burning off his ankle monitor. His label president, Lavour Sanders a.k.a. Boonman, took to Twitter to inform the public about Foogiano’s sentencing.

According to the Authentic Empire Music Group CEO, Foo is innocent.

“Green County Just Gave @FoogianoDaMayor 5 years for cutting an ankle monitor for a gun charge that wasn’t his and was claimed by some one else this is beyond crazy, we have to do something about this!”

Back in 2020, he was wanted after allegedly committing the felony. After the matter, he fled and was on the run before turning himself in to law enforcement last month. He was then charged for being a fugitive as well.

Foo’s entertainment lawyer, Bernie Lawrence-Watkins, did not have any statements from her client, but they plan on moving forward.

“The only thing I can tell you is we plan on appealing it,” she said to The Shaderoom.

His girlfriend and South Carolina rapper, Renni Rucci took to Instagram to support him during this trying time.

“You know what it is wit me! I got us. #freefoo,” she captioned. “These videos made me smile because the night he made this song about me I was in the next room making one about him. We was like two lil kids in love for the first time and it’s still that way.”

Due to his unjust encounters with the law, Meek Mill took to Twitter to offer his support to free Foogiano as well.

“Don’t try to kill that man whole career about tryna protect his self years ago!”

Foogiano dropped his latest track, “Free Foo” back in March.

The post 1017 Records’ Foogiano Sentenced to Five Years appeared first on The Source.