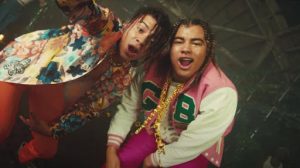 It doesn’t look like 24kGoldn is getting knocked out of the number one spot just yet. The 20 year-old artist has spent three straight weeks atop the Billboard Hot 100. He first dropped the Iann Dior assisted “Mood” back in July and the song slowly climbed the charts until it reached to the top. Most recently, he added more star power to the song by tapping Justin Bieber and J Balvin for the remix.

Now he has had four non consecutive weeks at No.1. He was only outed for one week by Ariana Grande, but quickly regained the throne the following week.

The post 24kGoldn’s “Mood” Remains Atop The Billboard Hot 100 For A 3rd Consecutive Week appeared first on The Source.