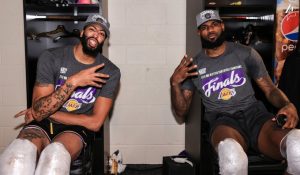 While the Brooklyn Nets shook up the NBA landscape by acquiring James Harden, many around the league look at the Nets as a serious contender to win it all. Anthony Davis does not sound too worried about the Nets.

Davis, who helped the Lakers win the championship last season, reacted to the Nets’ trade. He acknowledged they “look good on paper,” but he wants to see how they will look once they actually begin playing.

Davis has a valid point. On paper, the league hasn’t seen a big three like this before. It’s unclear how the Nets’ will look once all three are on the court together, it’s still unclear as to when Kyrie Irving will return to action.

In the meantime, Davis and the Los Angeles Lakers are rolling along like a well-oiled machine. The team is 7-0 on the road and currently sit atop the Western Conference standings. All the more reasons for Davis to have the wait and see approach about the Nets because the Lakers are still the big dogs of the NBA.

The post Anthony Davis on Nets New Big 3: “They Look Good on Paper” appeared first on The Source.

McConnell, Schumer fail to cut power-sharing deal amid filibuster snag
5 hours ago
Trump has talked to associates about forming new political party: report
5 hours ago
Trump stock performance falls short of Obama, Clinton
5 hours ago
Trump expected to pardon Bannon: reports
5 hours ago
Biden’s key national security picks had their confirmation hearings. Here’s what to know.
5 hours ago
3 Stocks That Could Win Big As The Biden Administration Takes The Wheel
5 hours ago