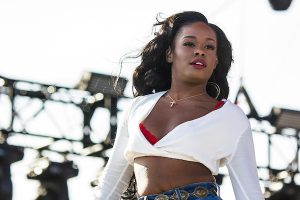 Azealia Banks has been in the media for some pretty interesting things but this one is the most ….. interesting. Banks dug up her dead cat and boiled it, the entire process was posted on her social media.  “Lucifer 2009-2020. My Dear kitty,” she wrote under the post. “Thank you for everything. A legend. An icon. Forever a serval serve.”

After Banks boiled the cat, which passed away three months ago, Banks posted a picture of the cat’s skull on her wall. Once the video went viral, it raised a lot of concern from Banks’ fans. “Waking up to Azealia Banks cooking her dead cat……wtf is wrong with her?” one fan tweeted with a meme of Tami Rowman gagging.

“Cats when they see Azalea Banks coming,” another fan wrote with a meme of a screaming cat.

Some fans are even suggesting that Instagram ban her account. This wouldn’t be the first time fans were concerned about the mental health of Azealia Banks as one of her previous stunts included the “212” rapper shaving her head completely bald on Instagram while telling her fans she’s about to be “bald like a seal.”

The graphic videos with the cat has been removed from Instagram.

Joe Biden is officially president. Here’s what he wants to do in office.
1 hour ago
Cop who warded off insurrectionists at the US Capitol escorts Kamala Harris on Inauguration Day
1 hour ago
The Kamala Harris identity debate shows how America still struggles to talk about multiracial people
2 hours ago
Kamala Harris is poised to be a historic — and influential — vice president
2 hours ago
The Hungry Mungry Trump
2 hours ago
The moment Trump officially left Washington
2 hours ago
Obalon Therapeutics stock soars to lead all gainers on massive volume after merger with ReShape
2 hours ago
Maha: 68 pc of targeted recipients get COVID-19 vaccines
2 hours ago
Motor racing-Domenicali says F1 could reduce and rotate races in future
2 hours ago
Evictions to racial equity: Calls for ‘immediate’ Biden action on housing
2 hours ago
Kochi court directs investigating officer to bring approver in actress attack case to court tomorrow
2 hours ago
UP HC to examine if lawyer in black robes exempted from coercive police action
2 hours ago