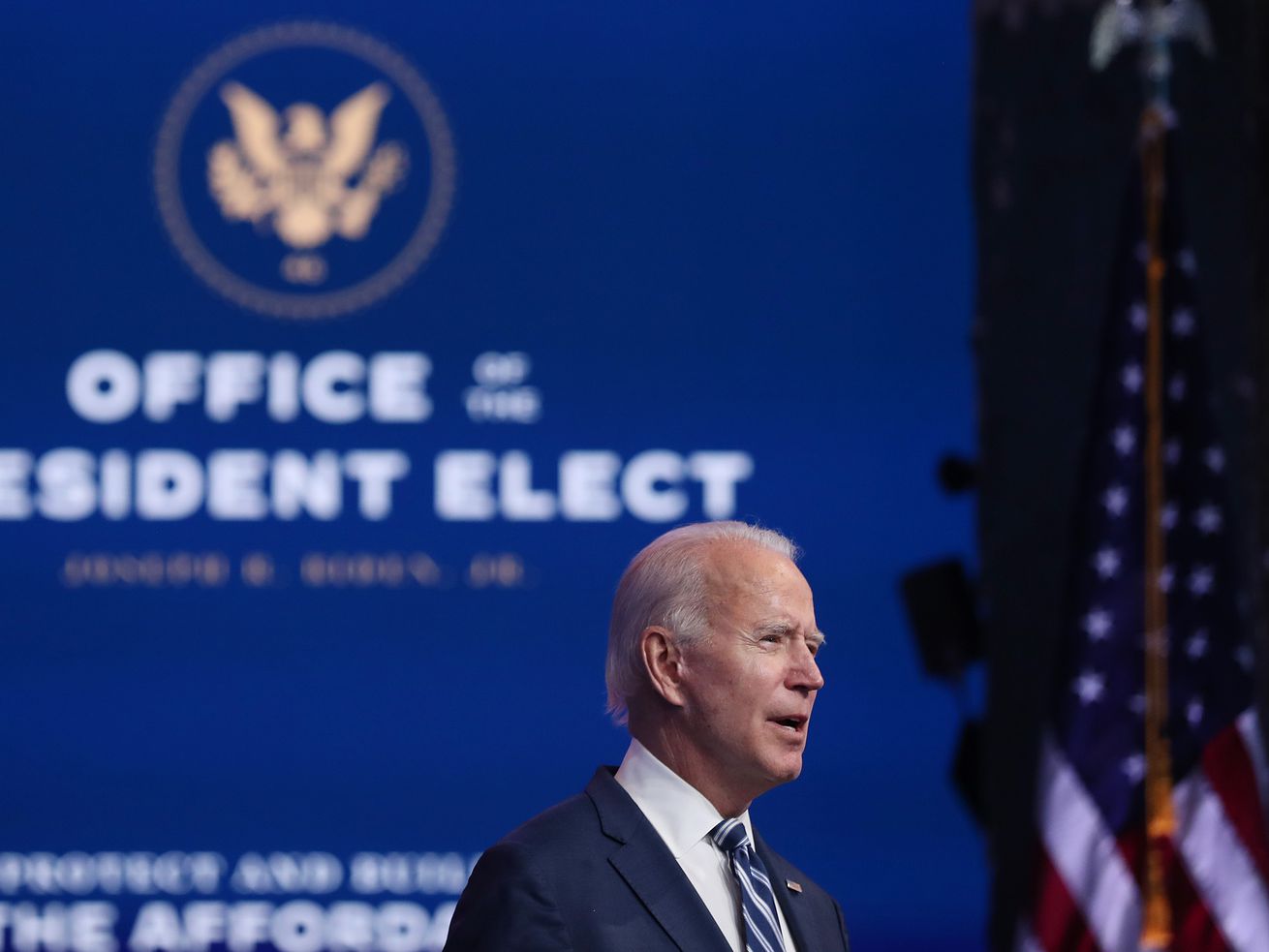 US President-elect Joe Biden addresses the media on November 10, 2020, at the Queen Theater in Wilmington, Delaware. | Joe Raedle/Getty Images

And he doesn’t need Congress.

Again and again over the last four years, the Trump administration has made it harder for Americans — and people abroad — to get basic reproductive health care.

In 2017, the administration reimposed and broadened a rule, sometimes called the Mexico City policy, barring health organizations around the world that get US aid from providing or even discussing abortions. The result was a reduction in access to abortion, as well as services like contraception and prenatal care.

The same year, Trump’s Health and Human Services Department issued rules weakening an Obama-era mandate requiring employers to offer insurance that covers birth control, allowing them to claim an exemption if they had a religious or moral objection. Those rules have been tied up by lawsuits, but just won a major victory at the Supreme Court in July.

And in 2019, the Trump administration finalized what reproductive health advocates call a “domestic gag rule,” barring health care providers that get federal family planning funds under the Title X program from performing or referring for abortions. As a result, hundreds of clinics have exited the program, cutting its ability to provide birth control services in half.

These actions have had a real and serious impact on patients, only compounded by a pandemic that has made it even harder for many Americans, especially low-income people of color, to access reproductive health care.

But there is likely an end in sight for many of the Trump administration’s policies: Since they were enacted by executive action, they can be undone by President-elect Joe Biden when he takes office, without any help from Congress.

Biden has promised to do exactly that, spelling out in campaign documents his plan to reverse many of Trump’s actions. “President-elect Biden believes that health care is a right that should not be determined by one’s zip code or income,” Mariel Sáez, women’s media director for the Biden campaign, wrote in a statement to Vox.

But the question for many is not whether the Biden campaign will simply roll back Trump’s policies — it’s whether he will go further to repair America’s reproductive health care system and strengthen it for the future. “The harms are so complex and, now, ingrained, that it’s going to be a real battle and a real fight,” Zarah Ahmed, associate director of federal issues at the Guttmacher Institute, told Vox. “We’re going to have to use every tool we can to undo those harms.”

Biden can reverse many of Trump’s policies. Advocates say he needs to do more.

Also known as the “global gag rule,” this policy has been enacted by every Republican president starting with Ronald Reagan, and repealed by every Democratic president. But President Trump enacted an even broader version of the policy — while previous Republican administrations had barred family planning organizations abroad that receive US aid from discussing abortion, Trump made the policy apply to any health organization that receives US money. That means nonprofits that work on tuberculosis, malaria, and all other health issues are banned from even bringing up abortion, lest they lose their funding, as Sarah Wildman reported at Vox in 2017.

The results have been devastating around the world. For example, a 2019 study across Kenya, Nepal, Nigeria, and South Africa found reduced access not just to abortion, but to contraception, prenatal care, HIV testing, and screening for breast and prostate cancer.

Like Democrats in the past, Biden has pledged to rescind the policy. “This rule currently bars the US federal government from supporting important global health efforts — including for malaria and HIV/AIDS — in developing countries simply because the organizations providing that aid also offer information on abortion services,” his campaign stated earlier this year as part of its “agenda for women.”

But reproductive health advocates want to see him do more. They are urging him to champion the Global Health, Empowerment, and Rights (HER) Act, which would permanently repeal the Mexico City policy. And Guttmacher is calling on the Biden administration to significantly increase the US contribution to international family planning programs, from the $575 million currently set aside for 2021 to $1.66 billion.

Both those moves would require the approval of Congress, a significant barrier if Republicans retain control of the Senate after January’s runoff elections in Georgia. But Biden should lead on reproductive health not just with executive orders, but with all the tools at his disposal, including pressure on Congress, Ahmed said. “The Trump administration has gone after and attacked reproductive health on so many fronts, so aggressively, that our response and the response from the Biden administration has to be equally aggressive and equally multifaceted.”

The Obama administration in 2011 designated contraception as one of the preventive care services that employer-provided insurance had to cover without a copay under the Affordable Care Act (ACA). That meant the millions of Americans who get insurance through their jobs could get birth control — including IUDs, which can cost more than $1,000 to insert — at no upfront cost.

But the Trump administration in 2017 announced broad exemptions to the mandate, allowing employers with a religious or moral objection to birth control to get out of covering it with relative ease. Those exemptions were soon tied up in court, but earlier this year, the Supreme Court upheld the exemptions in the case Little Sisters v. Pennsylvania. While they are not in effect yet — the Court referred the relevant cases back to lower courts for final decisions — the ruling in Little Sisters led many to expect they might take effect soon.

That’s unlikely to happen now. During the campaign, Biden stated that he would restore the contraceptive mandate without the Trump exemptions, leaving in place only Obama-era accommodations that allow houses of worship and religious nonprofits to decline to offer birth control. In those cases, an insurance party or third-party administrator is required to offer the coverage instead.

Established under President Richard Nixon, Title X is supposed to provide family planning assistance to low-income and other underserved Americans. It does not provide funding for abortions.

But in 2019, Trump finalized a rule barring health care providers that receive Title X money from performing or referring for abortions — even though they weren’t actually using the money to pay for abortions themselves.

The rule was largely viewed as an attempt to strip funding from Planned Parenthood, a longtime goal of Republicans and especially Pence, who introduced the first bill to do so as a member of Congress in 2007 (it didn’t pass). And indeed, Planned Parenthood exited the Title X program as a result of the new rule. So did many smaller providers — an estimated 981 clinics in total, according to Guttmacher. That reduced the program’s ability to provide contraceptive services by at least 46 percent, the group estimates.

And it wasn’t just birth control. Many Title X clinics also offer services like STI testing, prenatal care, and cancer screening — and in many cases, a Title X provider may be the only doctor a patient sees all year. With clinics having to reduce hours or services, or even shut down due to the lack of Title X money, some patients lost their only real source of routine medical care.

Biden has promised to change that, reversing the Trump administration’s Title X rule — one of the key planks of the campaign’s reproductive health agenda was “restore federal funding for Planned Parenthood.”

But restoring health care access won’t be as simple as getting rid of the Trump-era rule. As Alina Salganicoff, senior vice president and director of women’s health policy at the Kaiser Family Foundation, told Vox earlier this year, “when services go away, it’s not like you flip a switch and they start again.” Clinics that lost funding under Trump may have closed their doors or laid off staff, and increasing capacity again will take time, and potentially more money.

To strengthen the Title X program, advocates are calling on Biden not just to reverse Trump’s rule, but also to push Congress to significantly expand funding for the program. The Blueprint for Sexual and Reproductive Health, Rights, and Justice, a policy agenda developed by a coalition of reproductive health and justice organizations of which Guttmacher is a part, estimates the needed figure at $954 million. “As a budget is a reflection of priorities,” the Blueprint members said in a recent statement, “the president’s budget must demonstrate a commitment to sexual and reproductive health.”

Biden’s plans for reproductive health go beyond these three areas — he has also promised, for example, to restore health care protections for LGBTQ Americans rolled back by the Trump administration. And he has pledged to address the country’s ongoing maternal mortality crisis, which disproportionately impacts Black women, by embracing California’s data-driven strategy for reducing birth complications.

Some of Biden’s promises, like reversing Trump’s executive orders, will be easy to carry out. Others, like increasing funding, will be a lot harder.

But reproductive health advocates say it’s not enough just to undo what Trump did.

“It’s not just about bringing the US and the world back to where we were in 2016,” Ahmed said. “Things weren’t great in 2016 — a lot of people didn’t have access to care they needed and wanted and deserved. Yes, we have to undo this damage, but we also have to get to a far more equitable place.”

Brexit deal UP TO THE EU says Britain as anger mounts over Brussels’ ‘changing approach’
6 hours ago
Donald Trump FINALLY accepts defeat as he pledges to leave White House
6 hours ago
Kate set for ‘milestone moment’ as project she’s worked on for years lands results today
6 hours ago
Coronavirus lockdown tiers will be over by Easter, says Boris Johnson
6 hours ago
‘It’s not his money!’ Hubby gatecrashes Lottery call after hearing how much wife has won
6 hours ago
Brexit warning: Red tape means Northern Ireland to miss out on 15percent of M&S food range
6 hours ago

Brexit deal UP TO THE EU says Britain as anger mounts over Brussels’ ‘changing approach’
6 hours ago
Donald Trump FINALLY accepts defeat as he pledges to leave White House
6 hours ago
Kate set for ‘milestone moment’ as project she’s worked on for years lands results today
6 hours ago
Coronavirus lockdown tiers will be over by Easter, says Boris Johnson
6 hours ago
‘It’s not his money!’ Hubby gatecrashes Lottery call after hearing how much wife has won
6 hours ago
Brexit warning: Red tape means Northern Ireland to miss out on 15percent of M&S food range
6 hours ago
Macron sparks fury as he heaps praise on Maradona for defeating ‘Thatcher’s England’
6 hours ago
Good job we left! Hungary and Poland refuse to back down as bitter clash with EU escalates
6 hours ago
Prince Edward steps into Prince Philip’s shoes and honours new patronage in video
6 hours ago
‘Ridiculous!’ McDonald’s defended as chain accused of cultural appropriation over burger
6 hours ago
Trump says he’ll leave White House if Biden declared winner of Electoral College
6 hours ago
Dow Jones Futures Fall On Coronavirus Vaccine News, Bitcoin Dives; Watch Out For This
6 hours ago