As 2021 is just around the corner, President-elect Biden blurted out another blunder on Tuesday, calling a reporter a “one horse pony.”

As 2021 is just around the corner, Biden blurted out another blunder on Tuesday[/caption]

Earlier this month, Biden messed up the name and title of one of his new team members[/caption]

The 78-year-old Democrat was making his way out of a press conference when he was asked by a Fox News reporter his thoughts on whether Hunter Biden’s emails were Russian disinformation.

Biden answered: “Yes, yes, yes! God love you, man! You are a one horse pony.”

It is assumed the president-elect meant to call the reporter a “one-trick pony” – meaning someone or something that only has one area of expertise.

The former vice president’s choice of words were similar to when Biden left his audience aghast in February 2020 when he called a young woman a “lying dog-faced pony soldier.”

He appeared to insult the Biden supporter after she asked: “How do you explain the performance in Iowa and why should the voters believe that you can win a national election?”

Biden’s responded: “You ever been to a caucus?”

When the woman confirmed she had been to a caucus, the then-presidential hopeful awkwardly said: “No you haven’t. You’re a lying dog-faced pony soldier.”

In a more recent gaffe, earlier this month, Biden messed up the name and title of one of his new team members. 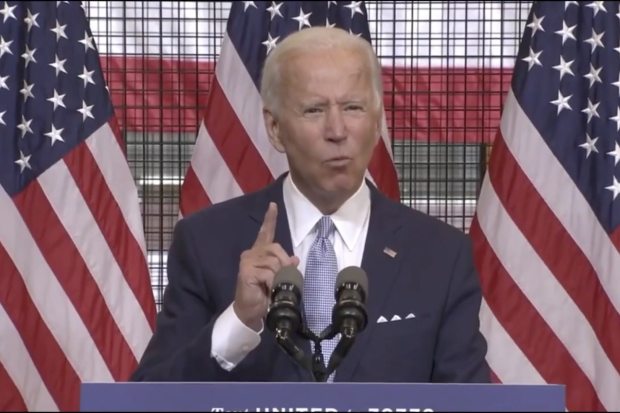 Biden had mispronounced Health and Human Services (HHS) Secretary nominee Xavier Becerra’s name prior to revealing he had planned to appoint him to the role of “Secretary of Health and Education Services.”

The soon-to-be president said: “For Secretary of Health and Education Services, I nominate Xavier Bacheria.

“You know, Xavier Becerra… excuse me.”

Back in May, Biden said “you ain’t black” if you vote for Donald Trump over him in the 2020 presidential race.

He uttered the words during an interview with The Breakfast Club host Charlamagne tha God.

Back in May, Biden said ‘you ain’t black’ if you vote for Donald Trump[/caption]

His answer came after Charlamagne tha God said: “Listen, you’ve got to come see us when you come to New York, VP Biden.

“It’s a long way until November. We’ve got more questions.”

Biden then quipped: “You’ve got more questions? Well I tell you what.

“If you have a problem figuring out whether you’re for me or Trump, then you ain’t black.”

In another instance, Biden appeared to think he was running more than 27,000 years in the future.

#Joe30330 or #Joe3030 started trending after he confusingly told supporters to visit a website that didn’t exist.

During his final remarks, Biden laid out his vision as he told them “if you agree with me, go to Joe 30330.”

It later emerged 30330 was actually a number for a text message service from which you could either donate or get updates on the campaign.

Speculation about Queen’s future defiantly shut down – ‘She will NOT give up her duty!’
26 mins ago
Scotland out in the cold: ‘We want you to stay’ result plummets over Scottish independence
26 mins ago
Prince Philip was left ‘upset’ by ‘malicious’ portrayal in Netflix’s The Crown – expert
26 mins ago
Royal Family shares rare snap of youthful Prince Philip in latest poignant update
26 mins ago
Prince Harry could ‘hugely regret’ not being able to say goodbye to Philip in person
26 mins ago
William and Harry’s relationship ‘in gutter’ as brothers prepare to honour Prince Philip
26 mins ago
Horror as baby found dead at Morrisons near Wolverhampton – Police search for mother
26 mins ago
Princess Anne releases touching message after Philip’s death – ‘Has been my teacher’
26 mins ago
Queen attends private mass for Prince Philip as other royals gather at church service
26 mins ago
British expats face Brexit tax nightmare as red tape hampers EU residency claims
26 mins ago
White House races clock to beat GOP attacks
26 mins ago
Trump’s irate, lie-filled RNC speech shows tensions in GOP
26 mins ago