BRITS are set to enjoy the warmest weekend in three MONTHS as temperatures soar to 16C on Saturday after weeks of freezing ice and rain.

The winter snow, ice, and frost may be behind us, with mercury set to stay in the mid-teens into next week across parts of southern England.

Read our UK weather live blog for the very latest news and forecasts... 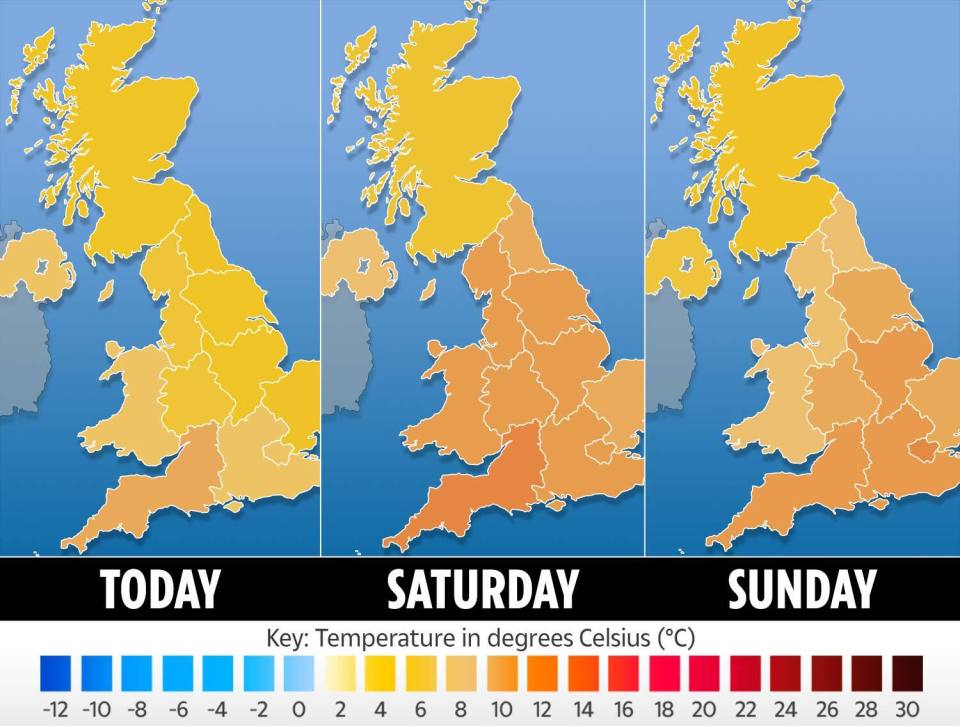 Temperatures are set to hit a balmy 16C this weekend for southern Brits – bringing hope that warm Spring weather is on the horizon.

According to BBC Weather, temperatures in London will be in the mid-teens on Saturday – and the mild weather is set to stay until next week.

But instead of sunshine, most parts of the UK will have to feel the warmer weather through widespread cloudy skies.

The last time temperatures hit highs of 16C was November 18 last year in London – and the hottest day since was February 2, where 14.2C was recorded in Cardiff.

This comes after a month of freezing weather which has seen severe snowfall across the UK.

On Wednesday night last week, the UK’s coldest temperature for 65 years was recorded in Aberdeenshire when locals endured -23C.

The River Thames froze over for the first time in 60 years as the Beast from the East 2 blasted Britain.

SPRING IN YOUR STEP

The Baltic blast froze Trafalgar Square’s fountains and brought large amounts of snowfall to regions across the country.

But not everyone in Britain will be enjoying a mild weekend – with the Met Office issuing four yellow weather warnings for rain on Saturday and Sunday.

Parts of southern England, Wales, and western Scotland will face persistent, heavy rain which will cause flooding and disruption to transport.

Interruptions to power supplies and other services are possible in the affected areas as they battle the February deluge.

The Met Office said: “Following recent rain, and further rain on Thursday, another band of rain is expected to become slow moving over Wales and western England on Friday.

“Whilst many places will see a spell of heavy rain, high ground of southwest England and south Wales, exposed to the south, will likely see the largest rainfall totals.

“Here, some 70-100 mm of rain is possible, with the most exposed parts of Dartmoor and the Brecon Beacons potentially seeing up to 150 mm by Sunday lunchtime.

“As well as heavy rain, strong to gale force southerly winds will be an additional hazard.”

The southern weather warnings will be in place for a total of 51 hours – lasting until midday on Sunday.

And in Scotland, melting snow is likely to contribute to the flood risk in the area.

Across England today, there are nearly 70 flood alerts and warnings in place as coastal gales and rain are expected to cause problems to transport.

Most read in UK News

ARE YOU FUR REAL?


WWII aircraft taken to pieces before it undergoes $5.6million restoration


Boy, 9, dies in ‘unexplained’ circumstances as man and woman arrested

Tomorrow, the Met Office predicts an east-west split, with “wet and windy” conditions in the west and drier weather in the east.

Occasional sunny breaks are predicted tomorrow, most likely in south east England, but some patchy downpours could arrive in eastern and central areas.

Covid-19 cases are down, vaccinations are up. But the US shouldn’t declare victory yet.
3 hours ago
The oil market’s wild pandemic ride is about to take another turn
3 hours ago
Cathie Wood’s ARKK Sinks 20% From Peak as Tech Sells Off
3 hours ago
Soccer-We never threw away the Cup, says proud Barca boss Koeman
3 hours ago
WRAPUP 1-POLL-Reflation trades in FX markets expected to continue in March
3 hours ago
Zoom recovers from hours-long outage, says issues were likely due to local internet glitch
3 hours ago

Covid-19 cases are down, vaccinations are up. But the US shouldn’t declare victory yet.
3 hours ago
The oil market’s wild pandemic ride is about to take another turn
3 hours ago
Cathie Wood’s ARKK Sinks 20% From Peak as Tech Sells Off
3 hours ago
Soccer-We never threw away the Cup, says proud Barca boss Koeman
3 hours ago
WRAPUP 1-POLL-Reflation trades in FX markets expected to continue in March
3 hours ago
Zoom recovers from hours-long outage, says issues were likely due to local internet glitch
3 hours ago
Biden says world on cusp of some ‘real breakthroughs’ on cancer
3 hours ago
English COVID-19 prevalence dropping at slower rate, study finds
3 hours ago
US welcomes steps taken to return J-K to full economic and political normalcy
3 hours ago
California crash victims suspected of being smuggled across U.S.-Mexico border
3 hours ago
Man found guilty of murder in 2018 Toronto van attack, life in prison likely
3 hours ago
Senate Democrats delay introduction of Biden’s $1.9 trillion COVID-19 aid bill
3 hours ago