SUSPECTS in the brutal Chillenden murders should be probed over the killing of a PCSO just two miles away amid fears of a serial killer, a barrister says.

Julia James, 53, was bludgeoned to death at Akholt Wood in Snowdown, Kent, last Tuesday with her killer still on the run.

The bloodbath was just two-and-a-half miles from where Lin Russell, 45, and daughter Megan, six, were killed in 1996.

Josie Russell, nine, survived the hammer attack in Chillenden with Michael Stone given three life sentences in 1998 despite protesting his innocence.

His barrister Mark McDonald QC now believes five other suspects in the murder should be investigated over Julia’s death.

He has contacted Kent Police in a bid to hand over details of the suspects as he fears the “real killer” could still be at large and could have struck again. 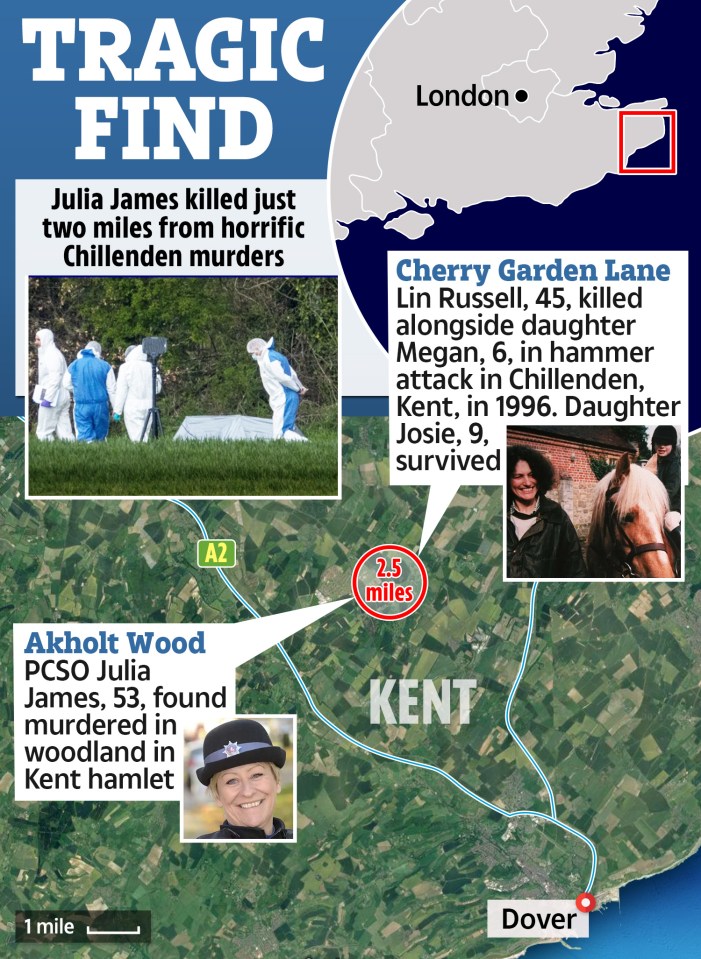 The lawyer said: “There are some concerning questions here. Reports have talked about police in the area looking for a reported attempted dognapper in his 60s in a BMW.

“He would have been in his 30s at the time of the Chillenden murders. There were a number of alternative suspects – one of which had really poor alibi evidence. But the police dropped everything when they focused on Stone. And they got the wrong man.

“I’ve reached out to Kent Police through their hotline, and said I’ve got all the material on alternative suspects from Chillenden.

“There were five alternative suspects. It’s remarkably similar. I haven’t heard back from them yet, but I’ve got everything – names, addresses, dates of birth.”

Lin was walking the family’s dog with Megan and Josie down a quiet country lane when they were set upon.

The mum and daughter were tied up, blindfolded and beaten to death with a hammer in an attempted robbery.

Stone, then aged 37, was arrested just over a year after the attack and charged.

He was handed three life sentences being found guilty at two trials following a confession to a fellow prisoner.

Stone has always maintained his innocence with his legal team arguing fresh evidence in 2017 cast doubt on the conviction.

Kent Police said last week they are keeping an “open mind” over Julia’s murder but refused to be “blinkered” by links between her killing and the Chillenden horror.

But eerie similarities have been pointed out by members of Julia’s family and locals in the small Kent hamlet.

In 1996, Michael Stone slaughtered Dr Lin Russell, 45, and her six-year-old daughter Megan, along with the family dog.

He also tried to kill nine-year-old Josie Russell, who miraculously survived the horror.

The family were tied up, blindfolded and attacked with a hammer as they walked in a country lane in the Kent village.

And Josie has gone on to see great success as an artist. She got engaged in 2018, when she said she hopes to be a mum.

Lawyers acting for him have claimed there is “compelling evidence” linking Levi Bellfield to the Russell killings.

Mr McDonald also pointed out random attacks carried out by a stranger, which police probing Julia’s death can’t rule out, are rare.

He added: “Being bashed to death over the head with a blunt-force object is unusual – and that’s the same as with Lin Russell and her daughter.

“They were all bashed around the head with a blunt-force instrument, two miles away from where female PCSO Julia James was killed. And if I’m right, and Michael Stone is innocent, the real murderer is out there, and he’s struck again.

“I don’t want to get too involved in the investigation but I have the reports on those suspects on my computer and I can give them to the police now.”

The lawyer continued: “We don’t want to in any way exploit what is a tragic murder and the obvious grief of the family, but Michael Stone is innocent and the person who killed the Russells is probably still out there.”

His comments come as the search for Julia’s killer enters its seventh day.

Police say they have “no clear suspects” and can’t dismiss the theory Julia, who worked for the police for 15 years, was attacked by a stranger.

Kent Police Assistant Chief Constable Tom Richards said the force can’t rule out if her killer was someone she came across in her work, a potential dog-napper or if there was a sexual motive.

Flowers left for the tragic mum-of-two[/caption]

Julia, who worked for the domestic violence unit, was not on duty at the time of her death or wearing uniform and had just popped out to walk the dog after working from home during the day.

And ACC Richards said all of her possessions were still with her body – with her Jack Russell Toby unharmed.

Locals have now been urged to “remain cautious, vigilant and aware of your surroundings when out and about”.

Julia’s uncle Michael Turnball pleaded with the public on Saturday to find her murderer before they cause “more grief to another family”.

Writing on Facebook, he said: “Julia has been taken from us by some worthless cowardly excuse for a human being for no other reason than his own sense of self gratification to justify what he did, leaving behind a family full of broken hearts and sadness.

“Please share this and let us find this monster before he can cause more grief to another family. #Justiceforjulia”.

Julia’s sister-in-law also called for the public to “help catch the monster” who killed her.

Their plea was echoed by other members of Julia’s family – including daughter Bethan, who added a thin blue line filter to her profile picture with the mum-of-two.


Three men try to abduct schoolboy, 11, after chasing him into London park

Officers are keen to speak to anyone in the area on Monday or Tuesday who may have seen something unusual or suspicious.