I HAVE mixed feelings about the new clapping for heroes on Thursday evenings and wasn’t at all surprised it didn’t have anywhere near the same impact this time round.

Of course we should be showing all of our front-line workers, teachers, police officers and those keeping our country going that we value and appreciate them, but nipping outside for a few minutes in the cold and dark to burst into applause obviously isn’t the same as a decent wage.

What NHS workers at the coal face would also prefer is everyone obeying the rules, staying at home, wearing a mask, observing social distancing and generally not behaving like aeholes.

It was hard enough for nurses, doctors, surgeons, paramedics and porters in the first wave of the pandemic in the spring of last year, but now they are physically and mentally exhausted and feeling increasingly overwhelmed.

I spoke this week to Dawn Bilbrough, a critical care nurse who, I’m sure you will remember, posted an emotional video last year pleading with the public to stop panic buying after she couldn’t buy basics in her local supermarket following a gruelling 48-hour shift.

Speaking to Dawn now, I saw how completely drained she looked, and she was understandably very teary talking about the realities of working in intensive care, where patients are dying in such large numbers.

Worryingly, she is noticing the virus is affecting all age groups, not just the very old and frail.

She has seen more younger people struggling to breathe and sadly losing their lives.

Like all NHS staff, Dawn is being stretched to the limit, and while she appreciates people saying thank you with the new Thursday night clapping, she made a heartfelt plea to everyone to also really knuckle down and stick to the lockdown rules.

Dawn told me we must all stick together for one final push to get the numbers down and endure this lockdown for as long as it takes.

While acknowledging that the nationwide clap for carers is a lovely gesture, Dawn and her beleaguered colleagues need so much more than that.

Of course, there’s light ahead of us in the form of the various vaccines now available and we should all be down on our knees thanking the incredible scientists and volunteers who have made this happen so swiftly and safely.

I’ve been banging on about it for months, and finally the Armed Forces have now been drafted in to sort out the distribution of life-saving vaccines.

This is especially welcome as I honestly wouldn’t trust our current Government to run the proverbial p*-up in a brewery.

Former PM Tony Blair said this week that during his term in office he was frustrated when certain policies or initiatives were kicked into the long grass by bureaucrats.

But he added that when he asked the Army to do something, it was immediately and effectively acted upon and the orders carried out to the hilt with no fuss or nonsense.

Here’s hoping there are enough soldiers left after all the defence cutbacks to organise the vaccinations that will give us a real chance of regaining the world we used to know.

I also have to salute all of you who have joined The Sun’s fantastic Jabs Army vaccine campaign to work as stewards to help roll out the vaccine.

Working with the Royal Voluntary Service, thousands of you have already signed up to assist with making sure the whole process runs smoothly.

You don’t need any qualifications, just a lot of friendly enthusiasm to help people receiving the vaccine park their cars, give assistance to those needing wheelchairs and being on hand to offer reassurance.

It’s Covid safe and a chance to really make a difference.

Find out how to join in below. 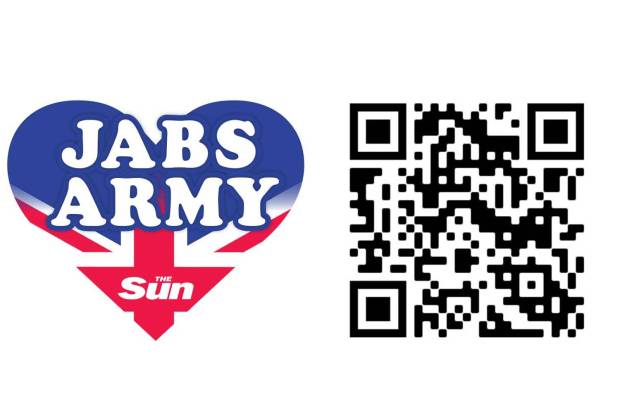 REGISTER for The Sun’s Jabs Army by going to the website below. You can also register using your phone with the QR code.

WATCHING events unfold at the heart of US democracy this week was like something from The Twilight Zone.

Sadly this is the reality at the start of 2021.

Five people died in a futile attempt to “save” Donald Trump and keep him in place as President.

That deranged, angry egomaniac incited his deluded followers into rampaging through the Capitol building in Washington and making a mockery of American democracy.

Trump has been building up to this for some time – and in the middle of a pandemic that has killed more than 360,000 Americans, he put his own greedy, grasping needs first, ahead of the sick and the dying.

Surely these disgraceful scenes will end any attempt for this preposterous orange windbag to run again for President in four years’ time – and halt any chance of some sort of Trump “dynasty” involving his hideous children and their spouses.

Compare his toddler tantrums with the grace and dignity of the Obamas, who left the White House with honour four years ago and helped ensure a swift transition of power, as befits a democratic society.

Though he has now been forced into saying there needs to be “an orderly transition”, can we really trust Trump to behave himself when President-elect Joe Biden is inaugurated?

Trump is perfectly capable of snatching the microphone and bellowing, “It’s so unfair!” before stamping his feet, spitting out his dummy and throwing himself on the ground with his arms and legs flying in rage.

We’ve got two more weeks to endure of this puffed-up popinjay until he is hopefully cast into the wilderness, shunned and ignored – and no longer given the oxygen of publicity and the limelight he so cravenly desires.

Let this be an end to the very sad joke that was Donald Trump’s political career.

And he had better not think he will find a welcome in the hillsides of Scotland.

Nicola Sturgeon has always had the measure of Trump and has made it very clear where he can shove his golf clubs.

INEVITABLY when an extremely good-looking young actor bursts on to the scene, especially one who looks good in a tuxedo, there are immediate calls for them to be the next James Bond.

In the case of Bridgerton leading man Rege-Jean Page, for once, the hype is more than justified.

He managed to make the emotionally buttoned-up and serial womanising Duke of Hastings into a character who was funny, sweet and vulnerable, as well as being smouldering hot.

I also think those criticising the production for its diversity either didn’t actually watch or turned off after five minutes.

They all missed a treat.

Many of the main and supporting roles are played by black and Asian actors but this doesn’t jar in the least.

You just enjoy the characters and the spectacle as well as all the naughty huffing and puffing.

With a global audience estimated at more than 60million viewers, Netflix will obviously be churning out sequels galore to this raunchy delight.

I just hope they can hold onto Rege-Jean and the luminous Phoebe Dynevor, who must surely be a shoo-in to step into Keira Knightley’s dainty slippers.

Run in a million

IF only there were more human beings in the world like the compassionate Eddie Izzard, who is currently running 31 marathons in 31 days with the aim of making the world a better place.

Eddie, who just before Christmas politely asked to be referred to using the pronouns she/her has launched the Make Humanity Great Again campaign and is running 26 and a half miles on a treadmill throughout January.

Instead of going to bed after every marathon effort with a hot water bottle and a jumbo sized bar of Fruit & Nut, Eddie goes on to perform an exhausting virtual stand-up gig, raising money for some brilliant causes and spreading love and understanding.

I look forward to the day when Eddie is declared a Dame.

No one deserves it more.

CAN we take a moment to talk about the incredible rugby legend Doddie Weir, who has raised more than £7million for research into motor neurone disease.

Doddie is living with this incurable and cruel disease, which affects the nervous system.

Remarkably, he is such a positive force of nature that anyone who comes into contact with the big man goes away energised and uplifted.

Through January, an army is being recruited to #DoddieAID, a brilliant idea that not only raises funds for MND research but gets us all up off our backsides and doing a bit of exercise.


Massive sinkhole swallows cars after opening up outside Naples hospital

You sign up for your district team (I’m North & Midlands), wear your #DoddieAID snood with pride and go outside to walk, run, ski, swim, hop, skip or jump to clock up the miles and help your side to victory.

It gives us all a chance to support one of our greatest living heroes.

Find out more at doddieaid.com.

The problem with India’s ‘love jihad’ laws
2 hours ago
Expert in fluid dynamics explains how to reduce the risk of COVID-19 airborne transmission inside a car
2 hours ago
Death threats and intimidation of public officials signal Trump’s autocratic legacy
2 hours ago
Senate GOP boxes itself in on impeachment
2 hours ago
FBI steps up efforts to build conspiracy case in Capitol riot
2 hours ago
4 reasons we’re seeing these worrying coronavirus variants now
2 hours ago
Court refuses to pass order on jailed activists’ plea for books
2 hours ago
Polish ruling restricting abortion to take effect on Wednesday
2 hours ago
QUOTES 3-No let up in short squeeze, retail frenzy forces funds to cover
2 hours ago
Suga says he and Biden agree to strengthen U.S.-Japan alliance
2 hours ago
Slovakia Holocaust survivors get COVID-19 vaccine on Remembrance Day
2 hours ago
Violence aftermath: Prominent farmer leaders, Medha Patkar named in FIR; 2 unions withdraw from stir
2 hours ago