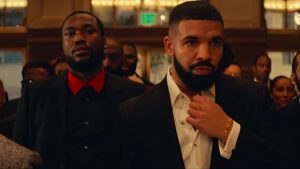 It looks like Drake has tapped into his A&R bag for Meek Mill. Champagne Papi recently hopped in the comment section of the Philly rapper’s IG post to suggest a new track. It has been some time since Meek Mill has dropped music. Following the success of his platinum album, Championships, the Dreamchasers CEO is taking his time with his next project. His previous two single releases “Other Side of America” and “Believe.” The latter featured Justin Timberlake.

Early on Friday (Oct. 16), Drake encouraged his friend to drop an unreleased track. Based on his distinguishing catalog and career, Drake has one of the best ears for music ever. If he recommends a song, it is like that it is a hit. According to HNHH, the track feature both Roddy Ricch and A Boogie Wit Da Hoodie. Both artists are proven hitmakers. Ricch held the No.1 spot on the Billboard Hot 100 for more than 12 weeks in 2020. A Boogie has had his share of success. Both artists have collaborated with Meek before.