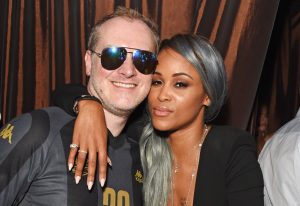 Eve recently announced that she’s exiting The Talk mainly due to COVID-19 traveling restrictions. But she also wants to take the time out to focus on expanding her family.

Fertility became a topic of discussion on a recent episode of the show and Sharon Osbourne shared that she had a friend who welcomed her first child at 50-years-old.

“Hearing that for me Mrs. [Sharon Osbourne], that gives me so much hope. I think as women we’re always told when you reach a certain age, ‘You’re too old. You should have done this then,’” Eve shared.

The rapper shared that she and her husband of six years, Maximillion Cooper, have tried different ways to conceive. She opened up about getting a myomectomy to remove her fibroids.

Eve went on to give advice to ladies who struggle with heavy menstruation cycles. “I used to have these horrible periods. And I’m only saying this to say, there’s a lot of women out there that think, we were told that periods are supposed to be painful. They’re not. Go to your doctor, and if they don’t believe you, go to another doctor.”

The post Eve Opens About Fertility Struggles: ‘We’ve Been Trying & Trying’ appeared first on The Source.

Kate Middleton ignites her ‘royal career’ with legacy project claims royal expert
6 hours ago
OUTRAGE after Chinese scientists claim coronavirus originated in India
6 hours ago
Fears of TOTAL WAR explode as Iran vows to strike back ‘like thunder’ after assassination
6 hours ago
HORROR: Doctors jailed for illegally harvesting hospital patients’ organs
6 hours ago
World War 3 fears surge as Russia threatens to retaliate after US forces ‘violate’ waters
6 hours ago
England faces ‘indoor socialising ban’ until EASTER under Covid rules
6 hours ago
FURY after anti-Brexit vandals rename Kent ‘the toilet of England’ on road signs
6 hours ago
Coronavirus BOMBSHELL: Vaccine to arrive at British hospitals in just 10 days
6 hours ago
Queen’s plot to foil staff’s Covid Christmas revolt and make it to her beloved Sandringham
6 hours ago
Brexiteer warns of major EU plot to ‘hamstring’ UK to its rules – fishing a ‘red herring’
6 hours ago
Biden adds to vote margin over Trump after Milwaukee County recount
6 hours ago
Republicans ready to become deficit hawks again under a President Biden
6 hours ago