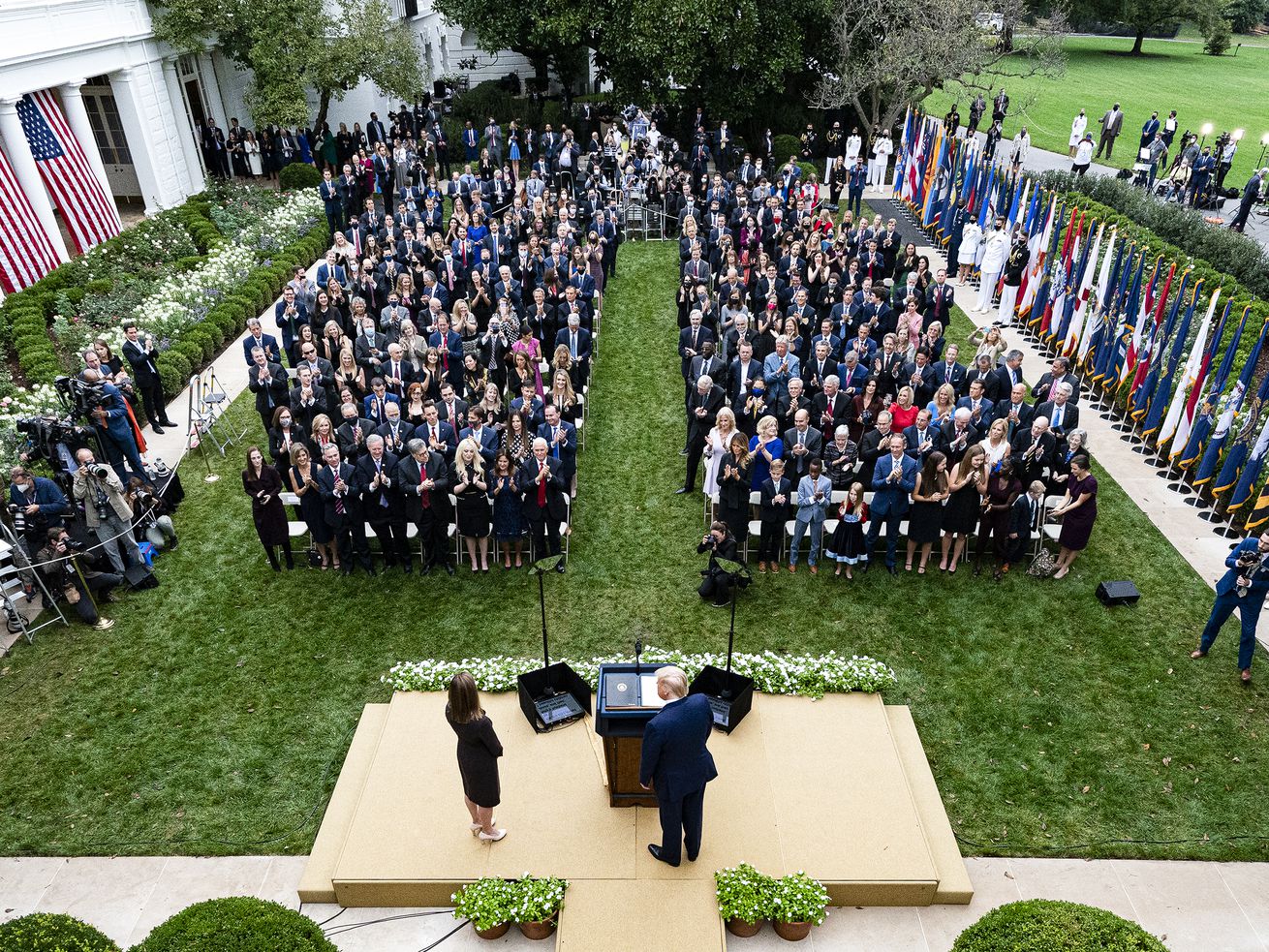 President Trump introduced Judge Amy Coney Barrett as his nominee to the Supreme Court at the Rose Garden on Saturday, September 26. Many attendees did not wear masks. | Alex Brandon/AP

These are the White House officials, lawmakers, and others who reportedly have the coronavirus.

A growing number of people in and around the White House have tested positive for the coronavirus — including President Donald Trump himself.

The president announced on Friday after midnight that he and first lady Melania Trump had tested positive for the coronavirus, joining several other high-ranking US government officials who have contracted SARS-CoV-2. Trump went to Walter Reed National Military Medical Center in Bethesda, Maryland, on Friday evening to undergo treatment.

On Monday, White House press secretary Kayleigh McEnany tested positive for the coronavirus that causes Covid-19; two of her aides also reportedly have tested positive. McEnany — and others in the White House cluster — failed to immediately quarantine after Trump’s diagnosis, and she appeared in front of reporters without a mask on Friday and Saturday.

McEnany and other Republican officials attended a White House event last weekend honoring the nomination of Judge Amy Coney Barrett to the Supreme Court. Republican Sens. Mike Lee of Utah and Thom Tillis of North Carolina announced after Trump’s diagnosis they had tested positive; both were at the event, which took place indoors and outdoors. Several other people, including former senior White House counselor Kellyanne Conway and Trump campaign manager Bill Stepien, also tested positive after attending the event.

Barrett, for her part, was diagnosed with the coronavirus over the summer but has recovered. It is unknown whether she now carries immunity.

But it’s not just the one event. On Saturday, Sen. Ron Johnson (R-WI) also announced having tested positive. Johnson was not at the Barrett event, but he did attend a lunch with other Republican senators last week.

Beyond the relatively well-known senators, members of the press, and White House officials who have tested positive, less well-known staff members and security officers could have been infected with the coronavirus in recent days. At least one such case has already been confirmed: Bloomberg reported Saturday evening that Trump aide Nicholas Luna tested positive.

The White House, in other words, is now a Covid-19 hot spot.

While it’s not clear how the president was exposed, Trump was in regular contact last week with senior counselor Hope Hicks, who tested positive on Thursday afternoon. Hicks had traveled with Trump multiple times last week, including to Tuesday night’s presidential debate in Cleveland, Ohio.

Over the summer, Republican Sens. Rand Paul and Bill Cassidy were diagnosed with Covid-19 but have successfully recovered. The virus has also infected at least 14 House members — nine Republicans and five Democrats — since March. But this is the first time the virus, which has killed more than 208,000 Americans, has spread in such a concentrated manner among White House officials, staffers, and members of the press corps.

As of early Friday afternoon, Vice President Mike Pence and his wife Karen have both tested negative, as have Democratic nominee Joe Biden and his wife Jill. Secretary of State Mike Pompeo and Director of National Intelligence John Ratcliffe tested negative as well.

Trump and his staff have been traveling to campaign events for several weeks. Just in the last week, the president has held rallies in Florida, Virginia, Pennsylvania, and Minnesota, in addition to the debate in Ohio. Bill Stepien, Trump’s campaign manager, tested positive Friday night.

Sen. Marsha Blackburn, a Republican from Tennessee, flew with Trump to the debate, and on Friday said she was getting tested and isolating “out of an abundance of caution.” Later that day, she said she had tested negative, as did Sen. Kelly Loeffler (R-GA).

One way to mitigate the outbreak from the event is to undergo a major contact tracing operation, though it appears the White House has made few efforts on that front so far. As Vox’s Dylan Scott explained, the only way to figure out the full extent of the outbreak is contact tracing: “identifying who has been in close contact with the president since he became contagious, and asking them to quarantine to prevent Covid-19 from spreading to others, and to get tested themselves.”

The Trump campaign announced in a statement Friday that he and his family are suspending in-person events. Pence’s campaign travel will continue and he plans to participate in the vice presidential debate against Democratic vice presidential nominee Sen. Kamala Harris on Wednesday.

Here’s what we know about who has tested positive — and negative — for SARS-CoV-2 so far.

Given the level of uncertainty created by this news, Vox has compiled a list of key administration figures who help run the country, key lawmakers who have been in contact with the president, and key Democrats in the 2020 election cycle who have recently gotten negative test results for the virus.

While it could take several days for an individual who has contracted the virus to test positive, these are the initial negative tests. Here’s the list so far: