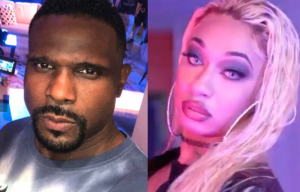 Family Matters Darius McCrary is sparking a flame with Love and Hip-hop star Sidney Starr, which has become the talk of social media.

Starr’s “Thanks baby baby” response had some wondering if whether or not the two were dating.

The former child star later posted a shirtless pic, giving Sydney a chance to return the favor, commenting, “Sexy daddy goodnight xoxos.” McCrary they replied with a bunch of emojis, with the last being a heart eye emoji.