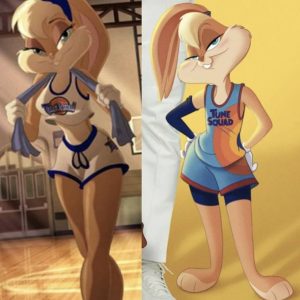 Entertainment Weekly unveiled the first-look of the highly-anticipated Space Jam: A New Legacy and fans get a chance to see LeBron James alongside the Tune Squad.

Lola Bunny is the character that generated the most buzz as fans noticed her less sexualized look in A New Legacy.

The movie’s director, Malcolm D. Lee explained that he thought it would be better to change her look for a more modern audience.

“This is 2021. It’s important to reflect the authenticity of strong, capable female characters,” Lee explained about the updated Lola, “a.k.a. the team’s best non-LeBron player.”

Lola Bunny’s sex appeal was definitely a highlight in the 1996 film as she was introduced with smooth saxophone music and the other male team players swooning over her.

Space Jam: A New Legacy is set to be one of the first films to premiere following the reopening of movie theaters in the Summer. However, it will be available to stream on HBO Max on July 16th.

Lola Bunny’s look was met with mixed reactions. What are your thoughts? Check out what the Twitter streets had to say below:

Speculation about Queen’s future defiantly shut down – ‘She will NOT give up her duty!’
50 mins ago
Scotland out in the cold: ‘We want you to stay’ result plummets over Scottish independence
50 mins ago
Prince Philip was left ‘upset’ by ‘malicious’ portrayal in Netflix’s The Crown – expert
50 mins ago
Royal Family shares rare snap of youthful Prince Philip in latest poignant update
50 mins ago
Prince Harry could ‘hugely regret’ not being able to say goodbye to Philip in person
50 mins ago
William and Harry’s relationship ‘in gutter’ as brothers prepare to honour Prince Philip
50 mins ago
Horror as baby found dead at Morrisons near Wolverhampton – Police search for mother
50 mins ago
Princess Anne releases touching message after Philip’s death – ‘Has been my teacher’
50 mins ago
Queen attends private mass for Prince Philip as other royals gather at church service
50 mins ago
British expats face Brexit tax nightmare as red tape hampers EU residency claims
50 mins ago
White House races clock to beat GOP attacks
51 mins ago
Trump’s irate, lie-filled RNC speech shows tensions in GOP
51 mins ago