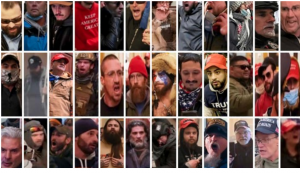 The FBI has begun a nationwide manhunt for the participants in the Capitol Hill insurrection and have released photos of the suspects in hopes of uncovering their whereabouts.

Several pictures have been made public on social media, however, the Bureau made a new wanted poster with 10 of the suspects from the middle of the siege of the country’s capital that left five people dead.

“We still have a significant amount of work ahead of us to identify and hold each and every one of the violent mob accountable for their actions,” said DC Metropolitan Police Chief Robert Contee. “These images depict individuals engaged in various acts of violence or property destruction.”

According to reports, the FBI has arrested the person who planted bombs at the Democratic and Republican national committees headquarters as well as the man photographed walking off with Nancy Pelosi’s lectern.

Joe Biden is officially president. Here’s what he wants to do in office.
2 hours ago
Cop who warded off insurrectionists at the US Capitol escorts Kamala Harris on Inauguration Day
2 hours ago
The Kamala Harris identity debate shows how America still struggles to talk about multiracial people
2 hours ago
Kamala Harris is poised to be a historic — and influential — vice president
2 hours ago
The Hungry Mungry Trump
2 hours ago
The moment Trump officially left Washington
2 hours ago
Obalon Therapeutics stock soars to lead all gainers on massive volume after merger with ReShape
2 hours ago
Maha: 68 pc of targeted recipients get COVID-19 vaccines
2 hours ago
Motor racing-Domenicali says F1 could reduce and rotate races in future
2 hours ago
Evictions to racial equity: Calls for ‘immediate’ Biden action on housing
2 hours ago
Kochi court directs investigating officer to bring approver in actress attack case to court tomorrow
2 hours ago
UP HC to examine if lawyer in black robes exempted from coercive police action
2 hours ago