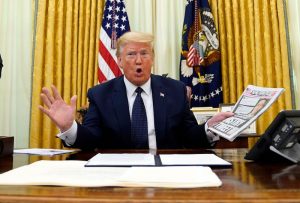 This might just be the nail in the coffin for Trump’s hopes of overturning the election results.

According to CNN, a federal judge dismissed Trump’s lawsuit that sought to invalidate millions of votes cast in Pennsylvania.

Judge Matthew Brann of the US District Court in the Middle District of Pennsylvania wrote on Saturday that “It is not in the power of this Court to violate the Constitution.” Judge Brann rejected Trump’s lawsuit to disregard Pennsylvania votes and said that the state will begin to certify election results on Monday.

“In the United States of America, this cannot justify the disenfranchisement of a single voter, let alone all the voters of its sixth most populated state. Our people, laws, and institutions demand more,” the judge wrote. “At bottom, Plaintiffs have failed to meet their burden to state a claim upon which relief may be granted.”

Even though the future of being re-elected looks almost nonexistent for Trump, he and his hair dye sweating personal lawyer, Rudy Giuliani, will continue to file lawsuits against states and demand recounts. Recently, his campaign asked Georgia to recount their votes, even after the state conducted a manual recount that showed Biden still winning. Georgia’s Trump-supporting secretary of state even said that the “numbers don’t lie” and declared Biden the winner of the election.

The post Federal Judge Dismisses Trump’s Lawsuit Over His Loss in Pennsylvania appeared first on The Source.