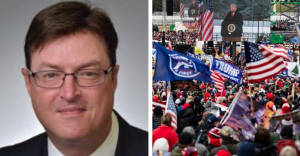 A 53-year-old investment manager who was suspected to have participated in the Trump-powered riots at Capitol Hill was found dead after an apparent suicide.

Christopher Stanton Georgia was found dead in his Alpharetta, Georgia home on Saturday, according to the Fulton County Medical Examiner’s Office. The regional portfolio manager at BB&T Bank was found dead from a gunshot wound to the chest.

Family members on the scene were described by police as ‘extremely distressed’ in a police report. Officers also removed two semi-automatic SKS rifles from Georgia’s home, the report added.

So far, at least 82 people have been arrested and more than 55 have been charged over the Capitol Hill Riots. Hundreds more are being hunted by the authorities but are yet to be found, including 25 people who are being investigated on terrorism charges.