INDIA is being urged to impose a 15-day national lockdown after announcing a record 400,000 Covid cases in a single day.

The grim tally for Saturday was followed by a further 392,488 cases yesterday and an additional 3,689 deaths.

India urged to impose 15-day lockdown after record 400,000 Covid cases in a day[/caption] 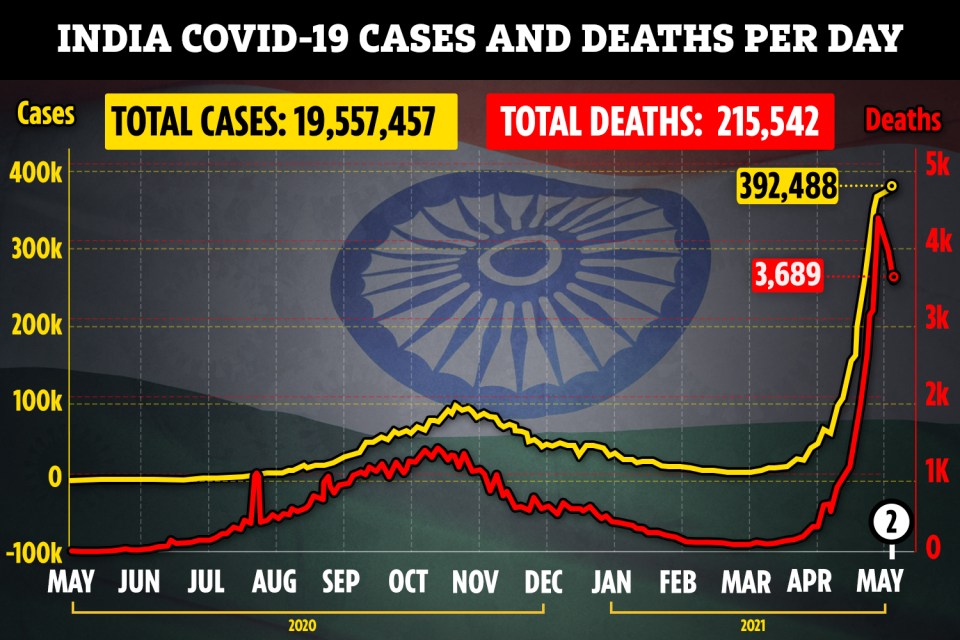 India’s overall death toll now stands at 215,542 – but experts say the true figure is likely to be much higher.

Images of funeral pyres burning and body bags lining the streets have continued to shock the world and led to a massive worldwide aid effort.

But experts say the heartbreaking scenes are likely to get worse over the next week as India nears its peak.

Dr Ranjeev Ranjan, chief advisor to the All Indian Institute of Medical Science, said a national lockdown was now being considered.

He said it would break the rate of transmission and allow the country to address the vast shortages of vaccine and oxygen.

New Delhi High Court also said it would begin holding local officials in ‘contempt’ if the shortages continued – declaring: “Water has gone above the head. Enough is Enough.”

The US has already called for a lockdown to contain the spread in India.

Britain yesterday pledged to send another 1,000 ventilators to the stricken nation.

Boris Johnson was forced to cancel a visit to India but will speak with his counterpart, Narendra Modi, on Tuesday as pressure mounts.

The PM said last night: “The terrible images we have seen in India in recent weeks are all the more powerful because of the close and enduring connection between the people of the UK and India.

“I am deeply moved by the surge of support the British people have provided to the people of India and am pleased the UK Government has been able to play our part in providing life-saving assistance.


Paramedic, 29, burnt to death in ‘homophobic attack‘ outside his home


Romney hits back after boos & calls of ‘communist’ & ‘traitor from GOP

“The UK will always be there for India in its time of need.”

And Foreign Secretary Dominic Raab is set to meet India’s External Affairs Minister Subrahmanyam Jaishankar on Monday on the margins of G7 talks this week in London.

He added: “We need to all work together to defeat Covid-19. No one is safe until we are all safe.”

These workers were left out of the New Deal. They’ve been fighting for better pay ever since.
2 hours ago
Seems like everyone hates Instagram for kids
2 hours ago
Bill Gates will never be the same
2 hours ago
Joe Manchin says he needs Republicans to support voting rights. He found one.
2 hours ago
Vaccine passports can liberate America
2 hours ago
What the cicadas will leave behind
2 hours ago

These workers were left out of the New Deal. They’ve been fighting for better pay ever since.
2 hours ago
Seems like everyone hates Instagram for kids
2 hours ago
Bill Gates will never be the same
2 hours ago
Joe Manchin says he needs Republicans to support voting rights. He found one.
2 hours ago
Vaccine passports can liberate America
2 hours ago
What the cicadas will leave behind
2 hours ago
One Good Thing: HBO Max’s Hacks features the amazing Jean Smart as an aging comedy legend
2 hours ago
The best £85 I ever spent: A cat to keep me company when I restarted my life
2 hours ago
The blandness of TikTok’s biggest stars
2 hours ago
Why AT&T’s stock is getting smashed after mega media deal with Discovery
2 hours ago
AT&T Is Cutting Its Dividend and Spinning Off WarnerMedia. Here’s How Much Its Stock Might Be Worth.
2 hours ago
Burry of ‘Big Short’ Fame Places Big Bet Against Musk, Tesla
2 hours ago