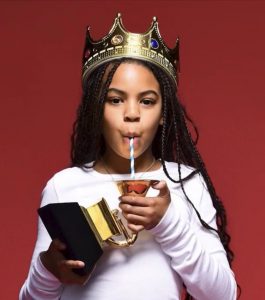 Biggie’s crown was auctioned for almost $600,000 and fans have reason to believe that Beyonce and JAY-Z bought it.

Blue Ivy Carter made history last week winning her first-ever Grammy for “Brown Skin Girl” alongside her mother and WizKid.

Beyonce shared a reel following her record-breaking Grammy win as well as a photo of Blue sipping on a straw inside of her Grammy which broke the Internet but fans couldn’t help but notice the familiar crown on her head.

The B.I.G. crown was sold at Sotheby’s Auction House last September for $594,750. The head piece was famously worn by Biggie during his King of New York photoshoot.

It’s not confirmed if Blue is actually wearing Biggie’s crown but it’ll be a huge flex if she is.

The post Is Blue Ivy Rocking Biggie’s Crown That Was Auctioned For $600K? appeared first on The Source.

Joe Biden’s ‘dangerous behaviour’ blasted as ‘weakness to be exploited’
5 hours ago
Britons LASH OUT at ‘vindictive’ EU over Spain’s new Brexit visa law -‘Can’t be trusted!’
5 hours ago
Boris Johnson urges ‘heavy caution’ as lockdown restrictions eased despite Indian variant
5 hours ago
China Covid cover-up efforts ‘staggering’ blasts Mike Pompeo amid ‘bio-weapon’ warning
5 hours ago
Nicola Sturgeon handed devastating poll on independence – support for Union on the rise
5 hours ago
Queen heartbreak as the only three people she ever trusted are now dead, claims biographer
5 hours ago
EU warning: Crisis looms as bloc set to lose £675billion with 16.5million jobs at risk
5 hours ago
‘Damage is done’ Prince Harry warned gulf with Prince Charles ‘very difficult to bridge’
5 hours ago
‘Shame on you BBC!’ Thousands block entrance to BBC Scotland during Palestine protest
5 hours ago
Madeleine McCann ‘killed in Portugal – not Germany’, claims prosecutor
5 hours ago
Gaetz compares allegations against him to earmarks: ‘Everybody knows that that’s the corruption’
5 hours ago
Inflation fears grow for White House
5 hours ago