KIM Kardashian West has amassed millions thanks to her entrepreneurial endeavors.

The TV personality, who has reportedly filed for divorce from husband Kanye West, founded KKW Beauty and KKW Fragrance in 2017 and launched her shapewear company Skims in 2019. Find out how much she is worth.

What does Kim Kardashian do for a living?

Kim Kardashian West is a reality star, model, and entrepreneur.

The company is projected to be worth $1billion thanks to Coty’s new investment.

This doesn’t necessarily mean the company has ever made $1billion, or that the money sits in Kim’s bank.

The valuation is a prediction.

Business Insider also reported that Kim would likely not be the company’s sole owner, with mother Kris Jenner predicted to own eight percent.

How did Kim Kardashian get famous?

She grew up in the LA scene as a friend and stylist of Paris Hilton’s but received wider attention after her 2002 sex tape leaked with then-boyfriend Ray J.

The Kardashian family collectively rose to fame after their show Keeping Up With the Kardashians debuted on E! in 2007.

The show is currently still on air in its 18th season.

What is Kim Kardashian’s net worth?

Forbes estimates Kardashian West’s net worth to be more like $900 million.

They wrote that KKW Beauty’s “sky-high” billion-dollar valuation likely has more to do with its social media presence than actual revenues.

Business Insider published an analysis this year showed that she and Kanye own “$35 million in stocks, $21 million in real estate, $3,845,162 worth of vehicles, and $297,050 of livestock, but it is unclear how these assets are divided between them or if they are divided at all.”

Her income is divided between KKW Beauty, SKIMS, Keeping Up With the Kardashians, and sponsored social media posts.

What did Kanye West say about her billionaire status?

Kim’s husband Kanye West took to Twitter to congratulate his wife on her projected status in June 2020. 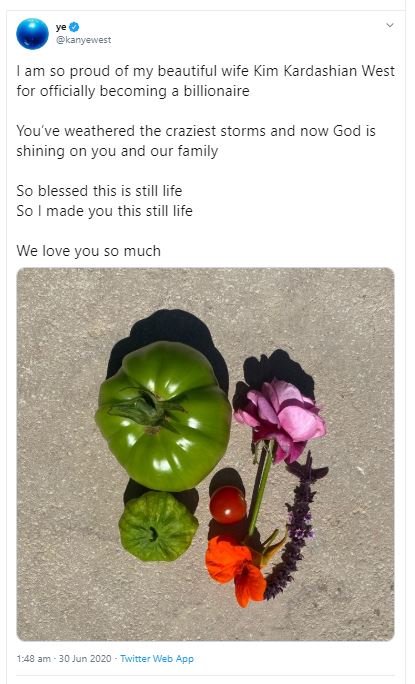 “I am so proud of my beautiful wife Kim Kardashian West for officially becoming a billionaire,” he wrote.

So blessed this is still life

So I made you this still life

We love you so much.”

It was reported in February 2021 that the superstar couple had filed for divorce. They had been living “separate lives” since the rapper’s mental health breakdown last year.

Though the couple has had a nasty split, sources tell TMZ things have been as “amicable as a divorce can be.”

Sources close to the family told the outlet Kanye is “fine” with the joint custody arrangement as the couple are “committed to co-parenting together.”

There’s a prenup and we’re told neither party is contesting it.

In fact, our sources say they are already far along in reaching a property settlement agreement.