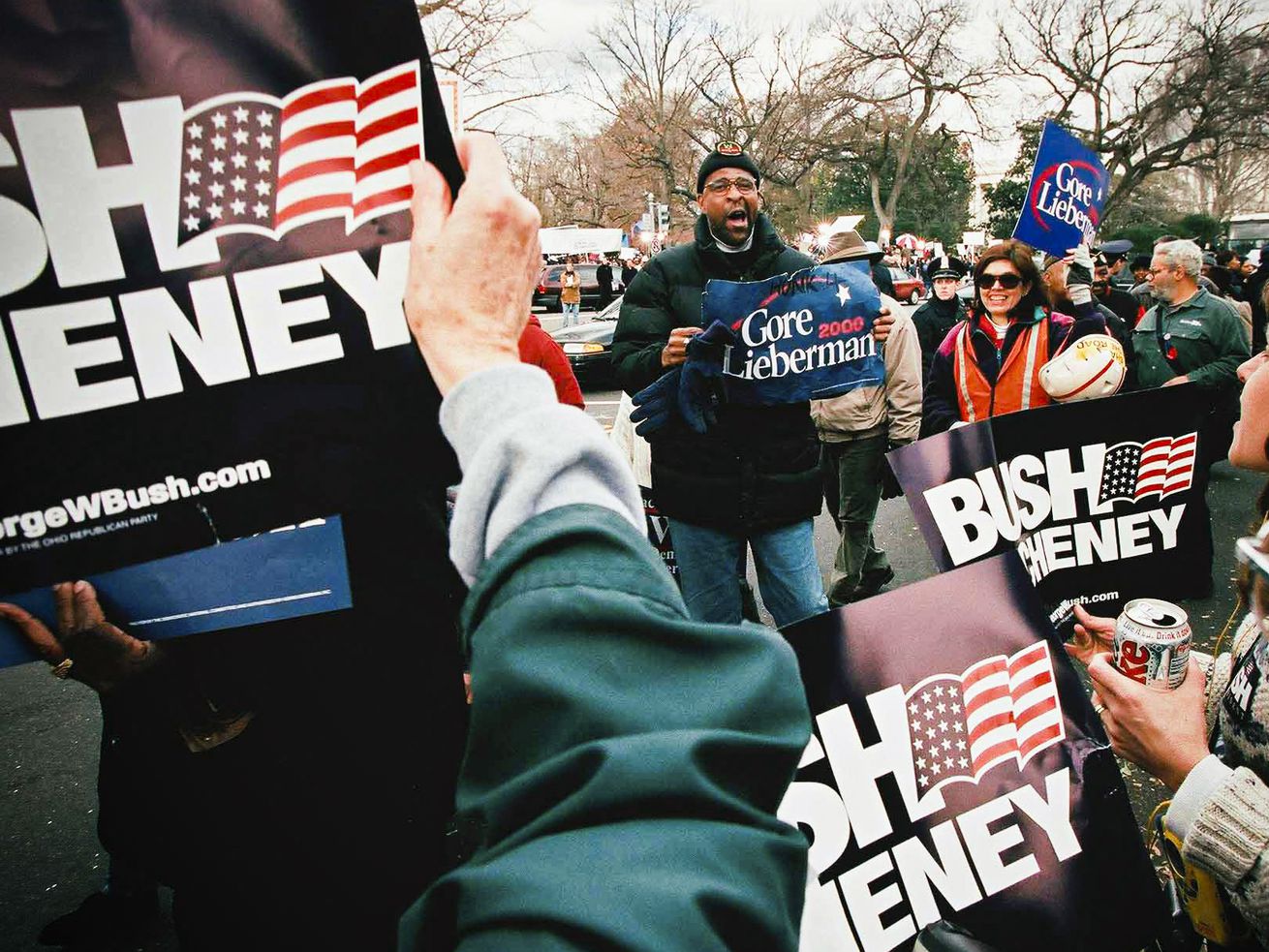 Supporters of George W. Bush and Al Gore protest outside the Supreme Court December 1, 2000, ahead of the Court’s ruling on that year’s presidential election winner. | Scott J. Ferrell/Congressional Quarterly/Getty Images

We never know how important an election really is until long after it’s over.

“There’s just one month left before the most important election of our lifetime,” Democratic presidential nominee Joe Biden tweeted in early October.

Two days later, Sen. Bernie Sanders backed him up. “This is the most important election, not only in our lifetime but in the modern history of our country,” he said in Michigan.

In 2016, it was Donald Trump deploying the cliché. “This is by far the most important vote you’ve ever cast for anyone at any time,” he said.

Before 2016, the campaign in which I heard the “most important election of our lifetime” talk most often was 2004, when George W. Bush ran for reelection against John Kerry. It certainly felt pivotal. It was a referendum on the Iraq War, which was built on lies and carried out by fools, and left Iraq soaked in blood. It was also a referendum on the hard right turn Bush had taken in office, away from “compassionate conservatism” and toward neoconservatism abroad, and a politics of patriotic paranoia at home.

Kerry lost that election. And yet, in retrospect, it clearly wasn’t the most important election of my lifetime, and it may even have been better that Kerry lost it. The ensuing four years forced Bush, and the Republican Party he led, to take responsibility for the disasters they’d created. The catastrophe of the Iraq War became clearer to the country, leading to a Democratic sweep in 2006. The financial crisis, which had been building for years, exploded, leading to Barack Obama’s election and the massive congressional majorities that passed the Affordable Care Act.

Perhaps a Kerry administration would have averted one or both catastrophes, but more likely, it would have simply been overwhelmed by them, leading to John McCain’s presidency in 2008 and a resuscitation of the neoconservative brand.

All that is speculative, of course. But this is an inherently speculative endeavor. “The reason to do counterfactuals,” says Catherine Gallagher, author of Telling It Like It Wasn’t: The Counterfactual Imagination in History and Literature, “is to give yourself a sense of reality about what was possible in the past.”

Here’s my theory: The elections that feel like the most important of our lifetime usually aren’t, specifically because that feeling, and the political mobilization it drives, limits their consequence. One reason reelection campaigns often feel like “the most important election” to the party out of power is that the stakes, and the costs, of losing the presidency last time have been revealed. But most presidencies wane in their second term, as their agenda is exhausted, their supporters are less inspired, and their opponents are better organized.

It’s when the opposition party doesn’t understand the kind of politician it’s dealing with, or misjudges the situation they will face, that presidents can slip loose of the normal checks and balances and govern most consequentially. Which brings me to the elections of 2000, and 2014.

The 2000 election ended in chaos, but it was carried out in confusion. Ralph Nader’s campaign gained so much traction in part because Bush and Al Gore worked so hard to blur their distinctions. Gore didn’t run as a climate hawk determined to save the world from warming; he ran as a centrist New Democrat, determined to sock away the surplus in a Social Security lockbox. Bush, for his part, promised to cut taxes, close the educational achievement gap, and eschew nation–building abroad. “Tweedledee and Tweedledum,” Nader called them.

“There was a chasmic difference between the kind George W. Bush promised and the presidency we got,” says Robert Draper, author of Dead Certain: The Presidency of George W. Bush. “That’s not entirely Bush’s fault, given 9/11. But people voted for Bush believing they’d be getting more peace and prosperity with perhaps deeper tax cuts and a more values-driven man in the Oval Office. They certainly didn’t count on the next president going to war against a country that didn’t attack us.”

It’s not just that 9/11 changed the questions facing the president. It’s that they changed the powers of the president. Congressional Democrats rallied around Bush — or, in other cases, feared opposing him — giving him latitude on foreign policy they’d never have permitted on domestic policy. The focus of the presidency turned from domestic legislation, where the executive has limited sway, to war powers, where the president’s authority is vast, and grew more vast under the legal theories the Bush administration pushed.

What ensued was a catastrophe that left hundreds of thousands of Iraqis dead, wasted trillions of American dollars and thousands of American lives, and reshaped global politics for a generation — up to and including paving the way for Donald Trump’s takeover of the Republican Party.

Imagining the alternative forces us into the tricky waters of counterfactuals. It’s easy enough to imagine Gore winning in 2000 — he won the popular vote, and many think that, absent the Supreme Court’s cynical intervention, he would’ve won a fair recount, as well. Perhaps Gore would have taken early intelligence warnings more seriously, and 9/11 would have been stopped, but I think that’s unlikely. From there, Gore wouldn’t have optionally chosen to invade Iraq, I’m confident in that.

The key question then becomes how Gore would have used the post-9/11 political moment. Just as many of Bush’s advisers had spent a decade obsessing over how to topple Saddam Hussein, and used 9/11 as the rationale for that project, Gore had spent decades obsessing over climate change. It seems possible, perhaps even probable, that Gore would have harnessed the moment to end our dependence on oil, disentangling us from the Middle East and so-called allies like Saudi Arabia, where most of the hijackers came from. And if Gore had been able to push America down the path of serious action on climate change, back when such action was easier and more effective to take, the pain and suffering that could have been avoided is incalculable.

The seduction of counterfactuals is that it’s easy to only imagine the ones you prefer. Perhaps, as president during 9/11, Gore is blamed for the Clinton administration’s inability to disrupt Osama bin Laden, and so he’s simply routed in 2004 by Sen, John McCain, who embarks on a course of foreign policy adventurism that leaves the Bush legacy looking modest.

My confidence in any particular alternative history is low, but my confidence in the underlying principle is high: It is moments of disruption and crisis that drive presidencies, and that’s why it’s so difficult to predict the importance of a political moment in advance. The reason the post-9/11 possibilities were so vast is the attacks dissolved the normal constraints of politics, and the personal preferences of the US president became unusually consequential.

We are still living in the catastrophic aftermath of Bush’s choices, choices that not only betrayed the promises of his 2000 campaign but wouldn’t have been possible in the context in which the 2000 campaign took place. Pre-9/11, there would have been no support for Bush invading Iraq, even if he’d wanted to.

Nor is it just presidential elections that have this feature. The 2014 midterm election, for instance, struck many as a deadened, dull affair. President Obama and congressional Republicans were trapped in conflict, and voter turnout was lower than it had been in 72 years. Mitch McConnell won back the gavel for Senate Republicans, but few suspected much would happen as a consequence — with Republicans in control of the House, gridlock was already the norm.

But then Justice Antonin Scalia’s heart stopped, and McConnell used his power to block Merrick Garland from so much as a hearing. There’s a good case to be made that it was the lure of that Supreme Court seat that united Republicans behind Trump’s candidacy, leading to his razor-thin victory.

Now Republicans stand on the precipice of a 6-3 majority on the Court, which would reshape constitutional law — and the possibilities of politics — for a generation. In reprisal, Democrats are considering abolishing the filibuster and reshaping the Court. Though the 2014 election felt, and was treated as, low-stakes when it happened, it proved to be one of the most consequential elections of my lifetime.

The lesson of all this: By definition, we don’t know which elections are unusually important when they occur, because it’s unexpected events — events that break the normal rules of politics, that create moments when individual leaders can reshape the course of history — that turn elections into the hinge points of history.

Millions turn to Vox each month to understand what’s happening in the news, from the coronavirus crisis to a racial reckoning. Our mission has never been more vital than it is in this moment: to empower you through understanding. But our distinctive brand of explanatory journalism takes resources. Even when the economy and the news advertising market recovers, your support will be a critical part of sustaining our resource-intensive work. If you have already contributed, thank you. If you haven’t, please consider helping everyone make sense of an increasingly chaotic world: Contribute today from as little as $3.

Ocho meses de confinamiento por COVID-19 y contando: ¿Qué podemos hacer cuando estamos aburridos?
1 hour ago
Why nursing home aides exposed to COVID-19 aren’t taking sick leave
1 hour ago
China beat the coronavirus with science and strong public health measures, not just with authoritarianism
1 hour ago
Laughing is good for your mind and your body – here’s what the research shows
1 hour ago
Why do tigers have stripes?
1 hour ago
A brief history of Georgia’s runoff voting – and its racist roots
1 hour ago

Ocho meses de confinamiento por COVID-19 y contando: ¿Qué podemos hacer cuando estamos aburridos?
1 hour ago
Why nursing home aides exposed to COVID-19 aren’t taking sick leave
1 hour ago
China beat the coronavirus with science and strong public health measures, not just with authoritarianism
1 hour ago
Laughing is good for your mind and your body – here’s what the research shows
1 hour ago
Why do tigers have stripes?
1 hour ago
A brief history of Georgia’s runoff voting – and its racist roots
1 hour ago
The rise and fall of Tab – after surviving the sweetener scares, the iconic diet soda gets canned
1 hour ago
Biden’s ambitious energy plan faces headwinds, but can move the US forward
1 hour ago
Opportunities to practice real-life philanthropy bring academic benefits
1 hour ago
Trump tells GSA that Biden transition can begin
1 hour ago
Democrats face increasing pressure to back smaller COVID-19 stimulus
1 hour ago
Michigan county board approves resolution in support of impeaching Whitmer
1 hour ago