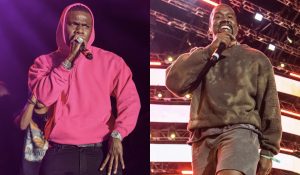 Kanye West is grabbing some of Hip-Hop’s best talent for his upcoming album. His latest addition is DaBaby.

2020 has been a busy year for the Yeezy mogul. West continues to make music, despite his claim to not release until he receives his masters. In addition, he does so while juggling a billion dollar company, the YZY-GAP partnership and his presidential campaign. Ye dropped his second official single on Friday entitled, “Nah, Nah, Nah.” The track is a follow-up to the Travis Scott assisted, “Wash Us In The Blood.”

While he has previewed several tracks on Twitter including the soul Lauryn Hill sampled track, there has only been two official releases. On Sunday (Oct. 18) Ye shared a text message thread between him and Da Baby. In the thread, the “Rockstar” rapper payed his respects to the music legend and promised to hop on whatever Ye had sent to him.

A few months prior, Ye expressed his desire to work with Lil Baby. Following the tweet, Lil Baby was seen in the studio with Ye in Wyoming. Now he calls on the North Carolina hitmaker for a collaborations.

DaBaby has continued his successful 2020 after solidifying his spot as Rap’s rookie of the year in 2019. He topped the Billboard Hot 100 charts with “Rockstar” for seven weeks. It continues to hold a spot in the top 10. The “Bop” rapper expressed his support for Ye’s presidential campaign back in August as well.

There is no telling when this collaboration is set to release, but it is good to see Ye working with the young stars of Hip-Hop today.

The post Kanye West To Collaborate With DaBaby On New Music appeared first on The Source.