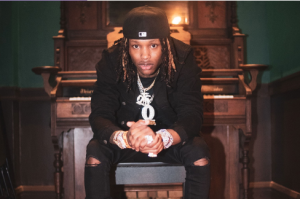 It has been 5 months since the passing of Chicago rapper, King Von. The “Crazy Story” rapper was involved in an altercation outside of an Atlanta nightclub that resulted in the rapper being fatally shot. Prior to his death, King Von was making a name for himself as one of Hip Hop’s best storytellers.

Around the time of the incident, King Von would shortly be releasing his album, Welcome to O Block, which includes some of the rapper’s most notorious singles such as “I Am What I Am”, “Demon”, “Armed and Dangerous”, “The Code”, and more.

The Recording Industry Association of America (RIAA) has made the news that King Von’s “Took Her to the O” on his album has officially gone platinum. Following up with “The Code” that has gone gold featuring Polo G.

This marks the second platinum hit from the singer, the first was Crazy Story. King Von’s manager stated that the rapper could possibly have at least 300 songs in the vault.

“Just going through my notes, I found a hundred songs, not released,” his manager stated after referring to Von as a workaholic. He then states that Von would always want his input on a song that he was working on, so he took it upon himself to really see how many songs Von had in the works.

Rest in peace to King Von, may his legacy continue to live on.

Why Facebook created its own ‘supreme court’ for judging content – 6 questions answered
13 mins ago
What causes miscarriages? An expert explains why women shouldn’t blame themselves
14 mins ago
Early humans used fire to permanently change the landscape tens of thousands of years ago in Stone Age Africa
14 mins ago
Taste alone won’t persuade Americans to swap out beef for plant-based burgers
15 mins ago
Arizona Republicans to brush off DOJ concern about election audit
15 mins ago
Jessica Alba’s net worth skyrockets in Honest Company IPO
15 mins ago