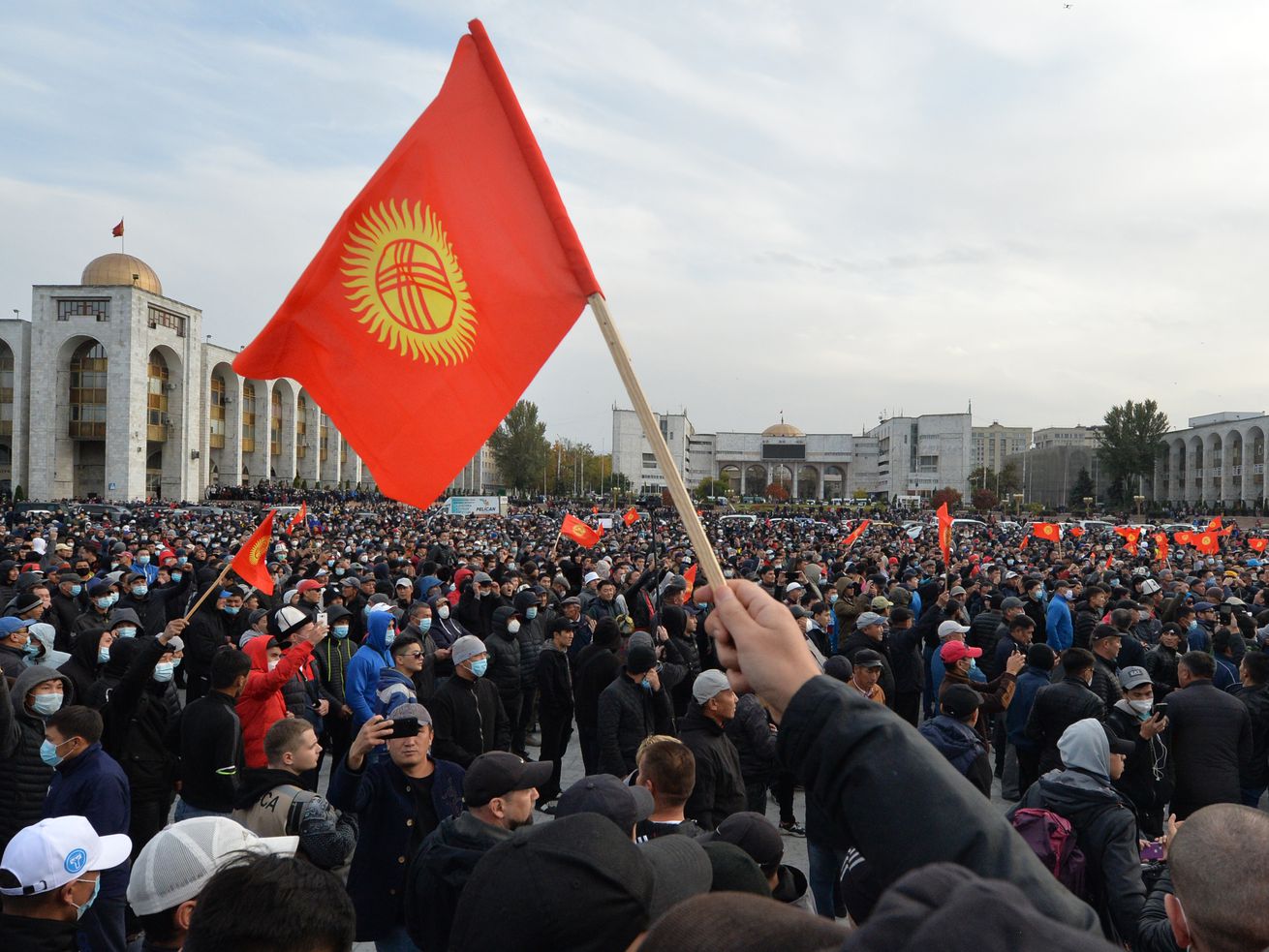 The Central Asian country faces its greatest political turmoil in a decade.

Gunfire in the capital. Deadly clashes between protesters and state security forces. Annulled elections. A nasty fight for political power. And a president who’s effectively been missing in action through it all.

Over the past week, these scenes have gripped Kyrgyzstan as the Central Asian country faces its greatest political crisis in a decade — one that could see the third ouster of a president in just 15 years.

Many of Kyrgyzstan’s 6 million people are deeply dissatisfied with the government due to widespread corruption and mismanagement of the Covid-19 pandemic. The country’s economy is in tatters, and many have no life savings or struggle to find steady work to bolster themselves against the downturn.

So when voters headed to the polls for parliamentary elections on October 4, most expected that the government-linked parties would be voted out.

But though past votes for Parliament in 2010 and 2015 were conducted freely and fairly by most accounts, the presidential election of 2017 saw current President Sooronbay Jeenbekov essentially installed by his predecessor. That led some experts to worry that this year’s election might be flawed.

Those fears grew when the results came in: Parties allied with the president had won the largest share of the votes.

Only four of the 16 parties in the running passed the 7-percent threshold to win seats; two of those four have links to the current administration, and each received about 24 percent support. One of those two parties, Birimdik, featured the president’s brother as a candidate. The other, Mekenim Kyrgyzstan, is backed by a former customs chief who’s reportedly a crime boss.

All the opposition parties that didn’t win seats immediately cried foul, alleging the election was rigged. Protests erupted in the streets of the capital, Bishkek, plunging the country into chaos.

And things just got worse from there.

Was the election rigged? Possibly not, but many are angry at the result.

There is some evidence that the victorious parties bought votes from cash-strapped citizens and placed undue pressure on local leaders to support them, perhaps at the direction of high-level government officials.

But Eugene Huskey, a professor of political science at Stetson University and an expert on Kyrgyzstan’s politics, said that “this election was probably less flawed than other ones in the country.” Though no exit polls have been released yet, he noted that the high returns for the parties that got into Parliament indicate they perhaps have more support than certain polls suggest.

Further, Huskey said the few surveys released before the election didn’t capture many of the changes that came later, like some parties folding or candidates switching allegiances. “This election overall was fair,” Huskey told me.

Still, dissatisfaction with the result drove thousands to Bishkek’s Ala-Too Square on October 5. Some went because they wanted to protest what they deemed to be an unfair election, reports show, while others joined because the party they liked — but that didn’t get enough votes to win seats — pushed them to rally against the result. In fact, nearly all opposition parties pushed for a rally.

The demonstration throughout the day was peaceful. But as night fell, state security services brutally attacked the protesters with tear gas and rubber bullets, killing one person and injuring at least 600 more per the nation’s health ministry.

Jeenbekov denies ordering the assault, though experts like National Defense University’s Erica Marat suspects the decision to push back on demonstrators was his alone to make. “He miscalculated the mood,” she told me. “He likely felt that if he dispersed the crowd, the whole thing would go away.”

But it didn’t, and instead it made things worse. “That was a major turning point,” Columbia University’s Colleen Wood told me.

A mix of people angry at the assault and provocateurs looking to stir trouble stormed the White House, the main government complex featuring the president’s offices and legislature. They seized the building, named changes to top government posts, demanded a new vote, and even freed political prisoners, including the current president’s predecessor and one-time ally, Almazbek Atambaev.

The past couple of days in Kyrgyzstan: political chaos, government buildings being stormed by protesters, a former president being sprung from jail during the night of October 5-6 — and, by morning, the annulment of the election results. pic.twitter.com/iHeOGaAuyZ

The following morning, the country’s election commission annulled October 4’s results to “prevent tension.” The problem is the decision only increased it.

“The power vacuum has turned violent”

Amid popular pressure, the prime minister of Kyrgyzstan — who is less powerful than the president but still provides some checks on his authority — offered his resignation on Tuesday (and finally had it accepted on Friday).

Since then, a messy political fight has broken out to replace him, that’s roughly contested between a pro-government camp and a pro-reform camp.

First, the pro-government side: On October 6, Sadyr Japarov, a former government official who was in prison before protesters released him the night before, met with a group of 35 parliamentarians at the three-star Dostuk Hotel in Bishkek.

But there are some problems with that, experts say. Thirty-five legislators doesn’t make an official quorum, for example, so the appointment is mostly meaningless as a legal matter.

It’s also unclear he’ll garner much popular support due to his ties to government figures and is a criminal himself. In October 2013, he led a protest that ended with taking a provincial governor hostage. He was charged and then fled the country, only to be arrested upon returning to the country in March 2017.

Experts don’t believe, though, that Japarov somehow planned a coup while in prison — events moved quickly and his connections to some in the legislature helped him gain some support.

As for the pro-reform side — a loose connection of more democratic-minded parties and supporters — Omurbek Babanov, who lost the controversial 2017 presidential election, has enough backing to make a challenge. He fled the country after that race for fear he’d be charged with crimes by the current president, only to come back this year to campaign for his old party which didn’t meet the 7 percent threshold.

That, in part, is why some experts fear he may not garner enough support for the job. Plus, they say Babanov may not be as pro-reform as he claims since one of his backers is Atambayev, the former president who rigged the 2017 election against him and still faces corruption charges.

Despite more people and semi-official commissions pushing others to take the prime minister spot, those two have become the main figures tussling for control. And tussle they have: “The power vacuum has turned violent,” said Columbia’s Wood.

Fist fights broke out in Bishkek between the two factions on Friday, culminating in gun shots heard throughout the capital. Some shots were fired at Atambayev’s car, and while he wasn’t harmed, it’s unclear if the bullets were errant or intended to kill him.

As a result of the violence, President Jeenbekov declared a state of emergency that will last until October 21 and be enforced by the nation’s military. Among other restrictions, movement in and out the capital will be heavily controlled.

That’s a rare move, said NDU’s Marat, as post-Soviet nations in Central Asia typically deploy their armed forces only for external matters. “The military doesn’t really involve itself in pacifying protests,” she said, but it goes to show how worried Jeenbekov must really be.

He’s apparently so worried, in fact, that he hasn’t been seen in days, and may even be hiding on purpose.

A lot rides on an absent president

Jeenbekov — who has yet to be seen in public since the protests began — promised to resign as president once a new prime minister and Parliament is in place, a new Cabinet sworn in, and rule of law restored. Experts aren’t sure if he’s just saying that to minimize anger toward him, or if it’s a serious offer.

Either way, he’s still the president, and the future of his country depends on what he does next, Wood told me. It’s quite tricky for him, she said, because if he intervenes and supports either Japarov or Babanov, then it’ll look like the government once again aims to influence an election. But if he stays silent, the uncertainty and lack of leadership might invite more chaos.

But his time is running out. The country’s election authorities plan to make a decision on when to hold a new vote in November, and it’s possible they will ban the pro-government parties that may have actually won the election this week. If that happens, “I can see this spinning out into even more conflict,” said Stetson’s Huskey, assuming violence doesn’t continue and worsen in the days to come.

Russia, which has immense influence in the country, is also watching events closely. “The situation looks like a mess and chaos,” Kremlin spokesperson Dmitry Peskov told reporters on Thursday, alluding to a treaty between the two countries that aims to avoid a breakdown of governance in Kyrgyzstan. He didn’t say what actions Russia might take, but the signal was clear: Russia might intervene.

The good news, experts said, is that parts of the country are trying to calm the situation down. Posts on social media, they say, overwhelmingly call for both sides to stop fighting. There are even groups protecting homes and businesses from looters, with other bringing those volunteers drinks to keep warm. “They’re trying to stabilize the situation from bottom up,” said NDU’s Marat.

That’s all well and good, but the person in charge of stabilizing the situation from the top down — the president — is still missing in action.

Which means Kyrgyzstan’s political turmoil is likely to last for a few more days — perhaps even longer. If that’s the case, the country may host its third major political revolution since 2005, possibly forcing out Jeenbekov before he’s ready.

Lyon attack: Gunman on run after shooting priest in French city days after Nice stabbing
23 mins ago
Ministers fear ‘anti-British’ Joe Biden could wreck UK/US trade deal
23 mins ago
UK weather forecast: Britain turns ICY BLUE in new chart – bitter blast expected
23 mins ago
Lockdown LOOMS as Boris calls urgent press conference – PM to address nation imminently
23 mins ago
What are you THINKING, Boris? Peston shames PM over lockdown -‘Catastrophic misjudgement’
24 mins ago
Black and Latino turnout lags white turnout in some key states. Democrats shouldn’t panic (yet).
24 mins ago
How a Michelin-starred restaurant became a pandemic takeout joint
24 mins ago
Study: Trump rallies may be responsible for an estimated 700 Covid-19 deaths
24 mins ago
As Trump downplays Covid-19, the US sets a world record for cases
24 mins ago
Sean Connery, legendary actor known for his role as James Bond, dies at 90
24 mins ago
How the polls look on the last weekend of the election
24 mins ago
98,000 new Covid-19 cases. And the worst may be yet to come.
25 mins ago