LIVERPOOL look like defeated ‘zombies’ and are in for a ‘depressing season’ if Jurgen Klopp cannot spark them back into life, slammed Gary Neville.

The Reds lost their FOURTH Premier League home game in a row on Saturday despite going nearly four years without defeat prior to the horror run.

That Merseyside derby loss took their tally to six defeats in their last nine matches in all competitions and the Anfield side are in serious danger of missing out on Champions League qualification.

Liverpool are sixth having played more than the three teams directly below them in the table.

They are five points off West Ham in fourth with 13 games to go.

Neville tried to summarise what is going on with the reigning champions – and what needs to change to get the club back on track.

Speaking on his podcast, Neville said: “It’s starting to get a little bit worrying in the sense we know they have got injuries, we know they have not got fans in the stadium, we know about Covid and there are a lot of games, but it’s the same for everybody.

“But it’s the lack of change. A different idea. They just look beaten, almost like zombies on the pitch. Walking around thinking the same thing.

“It’s not for me to advise Liverpool or Klopp what to do but playing a box to protect your centre-backs or maybe going to three at the back. We have seen other teams go to that system.

“But it looks to me they need a new idea just to give them a spark or it could be a really depressing season for them where they do not qualify for the Champions League, although I still think they will.

“It is a bit more of a worry than it was two or three weeks ago if you are a Liverpool fan.”

Liverpool’s tally of 40 points from 25 games is down 33 points on the same point last season as they ran away with the title.

The Reds are 19 points adrift of leaders Manchester City, who look set to storm to the title.

Pep Guardiola’s side have won 18 matches in a row and show no sign of letting up after a drop off last season. 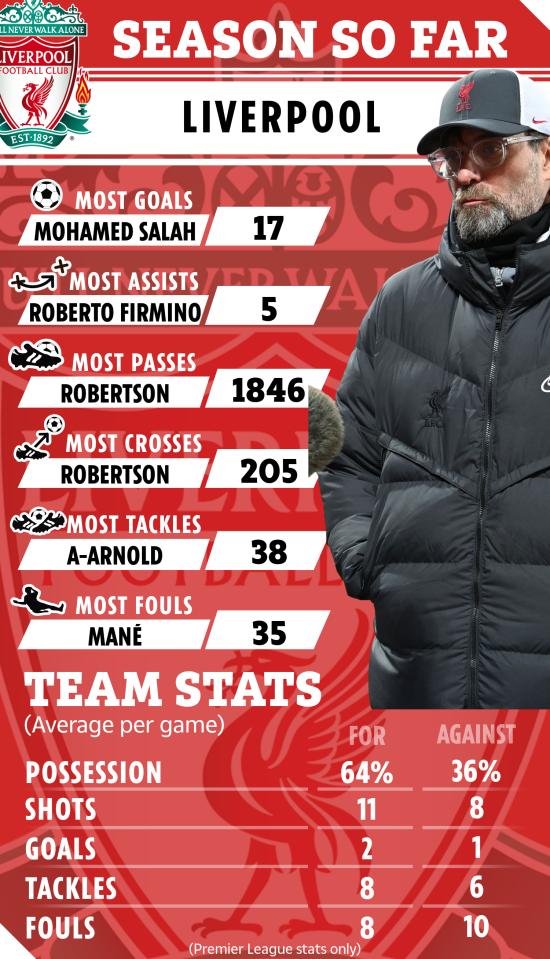 And Neville reckons Liverpool may need a year to refresh to challenge again next season.

The ex-Manchester United right-back added: “There is a chance of reset in the summer as that fourth year is always a challenge.

“Man City needed that year off last year when Liverpool won the league comfortably and maybe this is what it is for Liverpool.

“With fans returning, Virgil van Dijk and Joe Gomez returning it means they will be more confident over the summer but at the moment it’s desperate for them.

“I have not seen any change or a difference in what Liverpool do. Everton picked the right moment and if they were not going to show belief in that game then they never were.

“It was a brilliant moment for Everton. They look like they have more belief under Carlo Ancelotti in big matches. It should give the players confidence that they could have their best season for quite a while.”

‘UK can’t be trusted!’ Furious Ireland backs Brussels legal threat in Brexit trade row
3 mins ago
Angela Merkel humiliated as vaccine group APPROVES AstraZeneca for over65s – UK was right
3 mins ago
Joe Biden caves in UK-US trade win: Post-Brexit victory as Scotch whisky tariffs suspended
3 mins ago
Swexit threat issued to EU as bloc warned it ‘could be crippled’ after Brexit dilemma
3 mins ago
Nicola Sturgeon to receive £8m for post-Brexit freeport after SNP’s ‘screeching U-turn’
3 mins ago
Leading MEP threatens to veto Brexit deal as trade row explodes – Fury at Frost’s ‘games’
3 mins ago
Eurosceptic surge: Fresh alliance threatens Brussels – Hungary’s Orban sparks uprising
3 mins ago
UK weather forecast: Cold bites back as -4C deep freeze hits this weekend – risk of snow
3 mins ago
Boris Johnson facing Commons defeat over bid to cut foreign aid – Tory rebellion erupts
3 mins ago
‘What have you been drinking?’ Merkel’s meeting with German leaders descends into chaos
3 mins ago
2021 McLaren 765LT Probably Wonât Be Your Next Supercar, Unless You Already Have One
4 mins ago
Your favorite fishing stream may be at high risk from climate change – here’s how to tell
4 mins ago