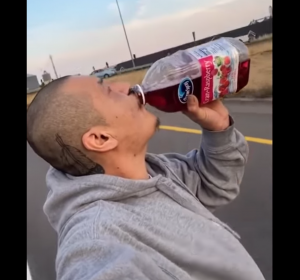 Positive vibes will always open doors. And nobody knows that better than the guy who went viral skateboarding to a Fleetwood Mac classic.

Recently,, a man went viral for the coolest vibe ever on wheels. And as a result, the gentleman who was just trying to make it to work on time has received a brand new truck, courtesy of his favorite beverage, Ocean Spray.

A rep for Ocean Spray pulled up to Nathan Apodaca’s RV Tuesday in Idaho. Known as the guy who just loves sipping cranberry juice while riding his board and vining to “Dreams” was extremely surprised by the generosity.

The CEO of Ocean Spray has also responded in kind to TikTok’s latest craze: the “Dreams” challenge, in which participants sip cranberry juice as they skateboard to Fleetwood Mac.

The video that started the trend, has now  been viewed 26.2 million times.

The new viral sensation has been gifted more than 10K in donations. Which he plans on using to buy a new RV. This story just feels good overall. Check out the vid that started it all.

The post Man Who Went Viral Cruising On Skateboard Gifted Truck By Ocean Spray’s CEO appeared first on The Source.