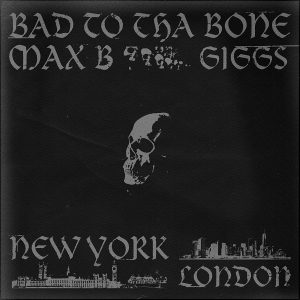 Biggavel is back with another one. In this instance, Max B goes overseas to get an assist from London native, Giggs. The Harlem and U.K. rappers link up for a gritty head-bopping track. The single comes after the release of The Wave God’s Summer ’20 mixtape, Charly.

Throughout the track, Max speaks to his rise from a 4-time felon to putting his time into his music. While he encountered some doubters, he stuck to his guns by any means necessary. During his prison stint, he claims to have made 7 figures and purchase his mother a home. The hook is an interpolation of George Thorogood & The Destroyer’s “Bad To The Bone.”

On the other, Giggs raps about being aware of his surroundings after growing up in his hood.

Max B also gives Bobby Shmurda a shoutout as well. Both Shmurda and The Silver Surfer are slated to be released sometime this year. The energy generated following the release of both New York rapper will certainly be a huge welcome home extravaganza in the Big Apple.

Check out Max B’s collaboration with Giggs below.

The post Max B Taps U.K. Rapper Giggs For New Single “Bad to Tha Bone” appeared first on The Source.

Speculation about Queen’s future defiantly shut down – ‘She will NOT give up her duty!’
25 mins ago
Scotland out in the cold: ‘We want you to stay’ result plummets over Scottish independence
25 mins ago
Prince Philip was left ‘upset’ by ‘malicious’ portrayal in Netflix’s The Crown – expert
25 mins ago
Royal Family shares rare snap of youthful Prince Philip in latest poignant update
25 mins ago
Prince Harry could ‘hugely regret’ not being able to say goodbye to Philip in person
25 mins ago
William and Harry’s relationship ‘in gutter’ as brothers prepare to honour Prince Philip
25 mins ago
Horror as baby found dead at Morrisons near Wolverhampton – Police search for mother
25 mins ago
Princess Anne releases touching message after Philip’s death – ‘Has been my teacher’
25 mins ago
Queen attends private mass for Prince Philip as other royals gather at church service
25 mins ago
British expats face Brexit tax nightmare as red tape hampers EU residency claims
25 mins ago
White House races clock to beat GOP attacks
25 mins ago
Trump’s irate, lie-filled RNC speech shows tensions in GOP
26 mins ago