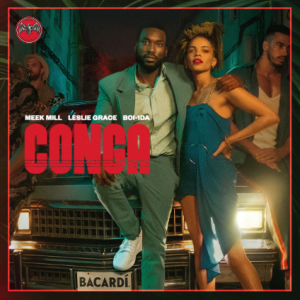 The legendary global single “Conga” has received an official remixed bringing in Meek Mill and Leslie Grace to the Boi-1da produced song, presented by Bacardi.

The new releases bring in fan submissions from across the world as a part of Bacardi’s “Conga Feat. You” campaign.

The new release is led by vocals from Grace, Meek Mill brings in the assistance on the verses, creating a perfect rendition of the 1985 hit single from Miami Sound MAchine’s Emilio and Gloria Estefan.

“BACARDÍ is thrilled to reveal the first-ever remake of the global smash hit ‘Conga’ and official music video. Over the past month, we closely reviewed all the incredible fan submissions from around the world and incorporated a select number into the final music video alongside the artists,” said Ned Duggan, Global Senior Vice President for BACARDÍ rum. “We’ve always seen music as such a powerful force in bringing people together, and as the world trended toward division and isolation this past year, we wanted to use music as a catalyst to bring people back together in a way that has never been done before. We can’t wait for you to see it.”

The new release comes with a music video that is sure to include “Conga” enthusiasts as they enjoy a vibrant Caribbean world.

The official song release will be included in a 30-second spot of the music video that will air during the Super Bowl pre-programming and during the premiere of The Equalizer starring Queen Latifah.

You can see the full video below.

Method: Add the BACARDÍ Superior Rum, lime juice sugar and mint to a highball glass. Press mint with a bar spook to release oil. Add crushed ice, almost to top, and churn. Top with Club Soda and crown with a splash of BACARDÍ Coconut Flavored Rum. Garnish with a mint sprig and lime wedge.

Speculation about Queen’s future defiantly shut down – ‘She will NOT give up her duty!’
27 mins ago
Scotland out in the cold: ‘We want you to stay’ result plummets over Scottish independence
27 mins ago
Prince Philip was left ‘upset’ by ‘malicious’ portrayal in Netflix’s The Crown – expert
27 mins ago
Royal Family shares rare snap of youthful Prince Philip in latest poignant update
27 mins ago
Prince Harry could ‘hugely regret’ not being able to say goodbye to Philip in person
27 mins ago
William and Harry’s relationship ‘in gutter’ as brothers prepare to honour Prince Philip
27 mins ago
Horror as baby found dead at Morrisons near Wolverhampton – Police search for mother
27 mins ago
Princess Anne releases touching message after Philip’s death – ‘Has been my teacher’
27 mins ago
Queen attends private mass for Prince Philip as other royals gather at church service
27 mins ago
British expats face Brexit tax nightmare as red tape hampers EU residency claims
27 mins ago
White House races clock to beat GOP attacks
28 mins ago
Trump’s irate, lie-filled RNC speech shows tensions in GOP
28 mins ago