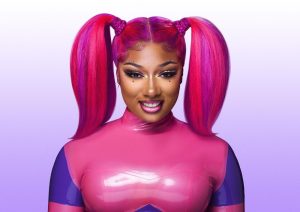 Earlier this year, Megan Thee Stallion inked a management deal with Jay-Z’s Roc Nation. The Houston Hottie joined a roster of elite artists and industry vets who were prepared to take her career to the next level. Not only did her deal proved to be a move to catapult her career, but she has developed a personal relationship with The Carters. Megan says that both Beyonce and Jay-Z constantly gives her personal and professional advice.

Megan recently appeared on The Late Show with Stephen Colbert where she shared what advice she receives from Hip-Hop’s royal couple. She was first asked how it feels to have Beyonce on speed-dial. She recalls seeing Destiny’s Child in concert as a kid.

“Being able to just speak to Beyoncé now? Girl, pat on the back ’cause this is great,” Megan says to Colbert. The Houston natives teamed up earlier this year on Megan’s multi-Grammy nominated track, “Savage.” The song went on to top the Billboard Hot 100 as well. When asked who gives the best advice from the couple, Jay-Z was the first one to come to mind for the Good News rapper. While each piece of advice is valuable, they are applicable depending on the time.

“I would say Jay-Z gives the fun advice,” said Thee Stallion while laughing. “Like, say if I’m having a bad day, he’ll be like, ‘Megan, girl you need to be somewhere driving the boat. ‘Turn up, Have a good time…. He gives me more Hot Girl advice.”

When asked about Beyonce, she is more calm when giving advice.

“Beyoncé is like, ‘Look, queen, just rise above.’ She says it the nicer way and Jay-Z gives it to me the turnt up way,” she said while smiling from cheek to cheek.

Peep the full interview below.

Speculation about Queen’s future defiantly shut down – ‘She will NOT give up her duty!’
2 hours ago
Scotland out in the cold: ‘We want you to stay’ result plummets over Scottish independence
2 hours ago
Prince Philip was left ‘upset’ by ‘malicious’ portrayal in Netflix’s The Crown – expert
2 hours ago
Royal Family shares rare snap of youthful Prince Philip in latest poignant update
2 hours ago
Prince Harry could ‘hugely regret’ not being able to say goodbye to Philip in person
2 hours ago
William and Harry’s relationship ‘in gutter’ as brothers prepare to honour Prince Philip
2 hours ago
Horror as baby found dead at Morrisons near Wolverhampton – Police search for mother
2 hours ago
Princess Anne releases touching message after Philip’s death – ‘Has been my teacher’
2 hours ago
Queen attends private mass for Prince Philip as other royals gather at church service
2 hours ago
British expats face Brexit tax nightmare as red tape hampers EU residency claims
2 hours ago
White House races clock to beat GOP attacks
2 hours ago
Trump’s irate, lie-filled RNC speech shows tensions in GOP
2 hours ago