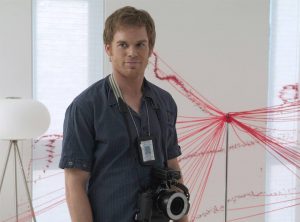 In case you need another show to binge-watch during the quarantine, Dexter is getting a limited reboot.

Showtime announced that they’re reviving the hit series for 10 episodes and our favorite serial killer and lumberjack, Michael C. Hall, is returning as the beloved Dexter.

Production is scheduled to begin in 2021 and may even air by the end of the year if everything goes as planned.

This seems like a random reboot but Showtime’s Co-President of Entertainment Gary Levine explained why the show is coming back in a statement.

“Dexter is such a special series, both for its millions of fans and for Showtime, as this breakthrough show helped put our network on the map many years ago,” he said “We would only revisit this unique character if we could find a creative take that was truly worthy of the brilliant, original series. Well, I am happy to report that [showrunner] Clyde Phillips and Michael C. Hall have found it, and we can’t wait to shoot it and show it to the world!”

The original series aired in 2006 and Dexter started off as a blood analyst for the Miami Police Department, but at night he would kill serial killers.

The post Michael C. Hall to Reprise His Role for ‘Dexter’ Limited Series appeared first on The Source.