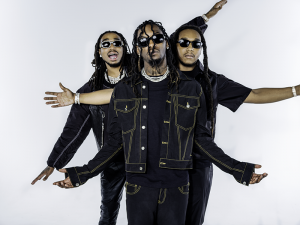 The long-awaited installment in Migos’ Culture series is coming sooner than expected. Migos is gearing up for the Culture III album spring release.

During an interview with TMZ on Sunday (Feb. 14), Quavo announced that the project is set to drop within the next 45 days. “It’s coming real soon, less than a month-and-a-half,” he said. That timeframe would put the album on track for release by the end of March.

“Quarantine been a pro and a con,” said Quavo. “It’s time for us to crack down and bond and know about our business and it’s time to get everything squared away, no bad feelings, no hard feelings nowhere. We’re just young men and just tryna grow. Right now, we’re at a point in our life where we’re allowed to sit down and get that so we can build and start from scratch all over again while we’re moving.”

Continuing on, Quavo made a tweet last month announcing the third album.

Are you ready for new Migos music? Let us know in the comments below.

The post Migos Gear Up For The ‘Culture III’ Album Spring Release appeared first on The Source.