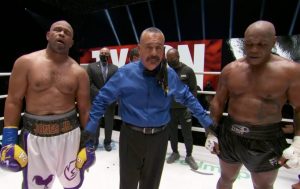 Mike Tyson revealed that he “absolutely” did smoke weed ahead of his highly-anticipated exhibition fight against Roy Jones Jr.

“Listen, I can’t stop smoking. I smoked during fights. I just have to smoke, I’m sorry. I’m a smoker. … I smoke everyday. I never stopped smoking,” he said during the post-fight press conference.

The heavyweight champion explained that marijuana doesn’t have a negative impact on him. “It’s just who I am. It has no effect on me from a negative standpoint. It’s just what I do and how I am and how I’m going to die. There’s no explanation. There’s no beginning, there’s no end.”

Iron Mike explained that the marijuana just numbs him and not the pain, when asked about the specific effects it has on his mood.

That must explain why Mike Tyson was able to refrain from putting the paws on an overzealous fan who reportedly approached him following the fight, which was a draw.

When the Brooklyn native was exiting the Staples Center, he was signing autographs when a man tried to initiate a fight with him and even took a swing.

But Tyson’s team intervened immediately before things went left. The outlet reports that they recognized him from a previous encounter and he had the same energy.

The post Mike Tyson Reveals He Smoked Weed Before His Exhibition Fight With Roy Jones Jr. appeared first on The Source.

Sign up for the Weeds newsletter
6 hours ago
Fauci threw a lot of shade at Trump in his first comments as a Biden adviser
6 hours ago
BRH Wealth case: HDFC Bank says Sebi orders depositing over Rs 158 cr in escrow account
6 hours ago
Hosting ‘Jeopardy!’ has been ‘nerve-racking,’ Ken Jennings says: ‘I wish it was still Alex out there’
6 hours ago
‘Bachelorette’ star Clare Crawley breaks silence on Dale Moss split: ‘I am crushed’
6 hours ago
The Britney Spears Conservatorship Situation, Fully Explained
6 hours ago