A SAILOR was found clinging to the side of his capsized boat two days after he was reported missing by his family, officials said.

Stuart Bee, 62, was marooned off the coast of Florida in the Atlantic Ocean when he was spotted by the crew of the 225-foot-container ship called the Angeles on Sunday.

Bee, 62, was marooned in the Atlantic Ocean about 86 miles off the coast of Port Canaveral on Friday[/caption]

Officials said Bee was found uninjured, but it was not clear why his boat had capsized[/caption]

He was about 86 miles off the coast of Port Canaveral, according to the US Coast Guard officials.

Petty Officer Veronica Dunn-Depretis told ABC News that Bee was not injured and it wasn’t clear why his 32-foot boat had capsized.

“He was clinging to that when they came across him and they pulled him up on their vessel,” Dunn-Depretis said.

Photos show Bee miraculously swimming toward an orange lifesaving buoy and climbing onboard the Angeles.

Bee – who does not typically stay on his boat overnight – had sailed from Cape Marina in Port Canaveral on Friday and did not return, a press release stated. 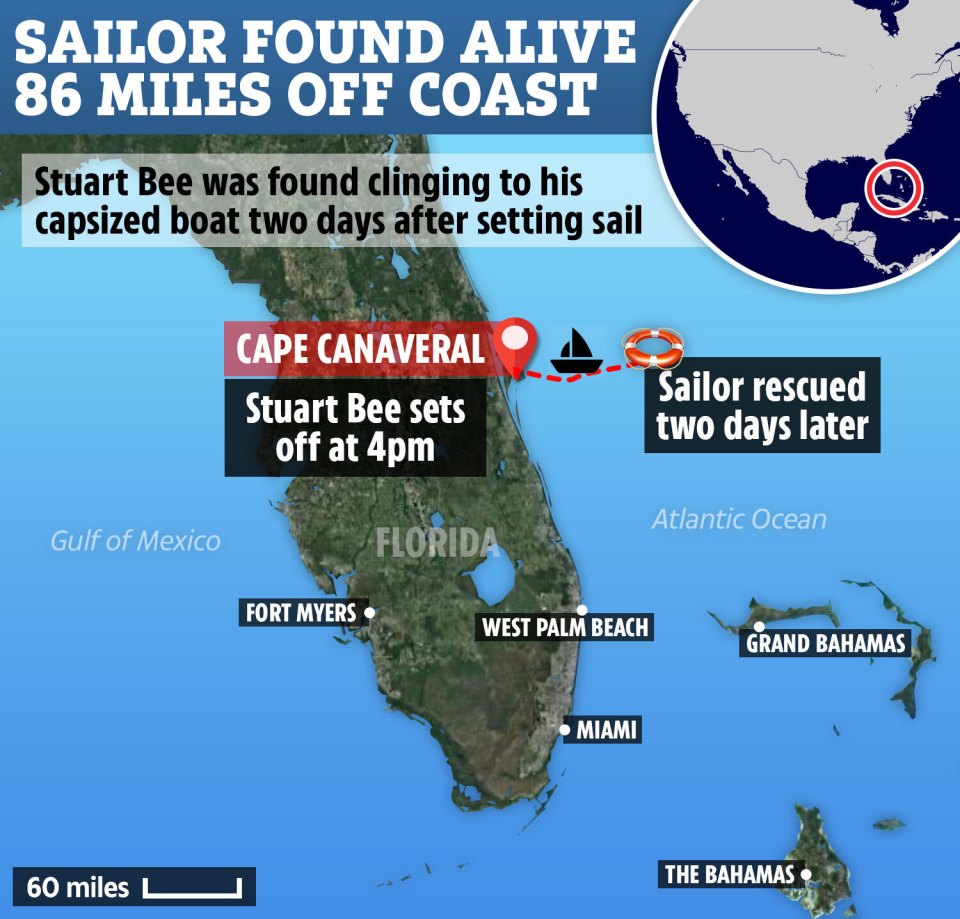 
Toddler dies after ‘being given alcohol, burned with chemicals & raped’


Baby ‘born with antibodies’ after mom caught coronavirus while pregnant

The Coast Guard issued an Enhanced Group Calling to mariners located to watch out for Bee’s boat, called the Sting Ray, and report any findings.

“This is a truly incredible outcome that demonstrates the bond among all mariners and our community.”

Tony Blair urges Boris Johnson to lead international coronavirus ‘passport’ push
5 hours ago
Kate Middleton said to have direct line with Queen Elizabeth II – ‘Fantastic relationship’
5 hours ago
Meghan Markle and Prince Harry ‘can’t bear’ criticism as social media ‘death trap’ looms
5 hours ago
EU vaccine CHAOS: AstraZeneca loyal to UK and Brussels HUMILIATED as jab row turns ugly
5 hours ago
Meghan Markle ‘misjudged’ Royal Family role as Kate Middleton ‘adapted’ claims embroider
5 hours ago
Prince Charles hits back at Holocaust deniers and conspiracy theorists in grim tribute
5 hours ago
Sophie Wessex and Queen’s ‘new favourite’ grandson to step into limelight after Megxit
5 hours ago
Trump divorce: Melania’s ‘tough’ communist upbringing will ensure she stays with Donald
5 hours ago
Prince Philip will NOT ‘want anything to do’ with 100th birthday as planning ‘begins’
5 hours ago
Kate Middleton giggles as Holocaust survivor cheekily snubs William in flirty comment
5 hours ago
Why the next major hurdle to ending the pandemic will be about persuading people to get vaccinated
5 hours ago
A universal influenza vaccine may be one step closer, bringing long-lasting protection against flu
5 hours ago