NANCY Pelosi has said she will proceed with the articles of impeachment against Donald Trump to stop him running for President again.

The House Speaker revealed she wants to press on with the unprecedented move unless Mike Pence uses the 25th Amendment to force him from office.

For impeachment to succeed, two-thirds of senators would have to vote in favor of Donald Trump’s removal before the end of his term on January 20[/caption]

The House Speaker outlined her intentions in a letter and launched a blistering attack on Trump, branding him a threat to democracy.

The outspoken democrat said: “In protecting our Constitution and our Democracy, we will act with urgency, because this President represents an imminent threat to both.

“The horror of the ongoing assault on our democracy perpetrated by this President is intensified and so is the immediate need for action.”

Pelosi had urged Mike Pence to use the 25th Amendment to the Constitution which allows the Vice President and the Cabinet to remove the President if he’s deemed unfit for office.

But she said if he’s unwilling to do so then she will press on with impeachment, which would have the advantage of barring Trump from being President again.

During an interview with 60 Minutes’, host Lesley Stahl put it to Pelosi that if “there’s no punishment, no consequence, and he could run again for president”.

The House Speaker replied “that’s one of the motivations that people have for advocating for impeachment”.

Pelosi explained why she still preferred using the 25th Amendment.

“Well I like the 25th Amendment because it gets rid of him,” she said of Trump.

“He’s out of office. But there is strong support in the Congress for impeaching the president a second time. This president is guilty of inciting insurrection. He has to pay a price for that.”

In her letter, Pelosi, the House’s initial step will be trying to force Vice President Mike Pence and the Cabinet to remove Trump from power.

She said the action would be made to “declare the President incapable of executing the duties of his office, after which the Vice President would immediately exercise powers as acting President.”

Crazed Trump fans are pictured inside the Capitol building on Wednesday, January 6[/caption]

Trump fans are pictured outside the US Capitol on Wednesday, January 6[/caption]

The 80-year-old speaker of the House continued: “If we do not receive Unanimous Consent, this legislation is planned to be brought up on the Floor the following day.

“We are calling on the Vice President to respond within 24 hours.

“Next, we will proceed with bringing impeachment legislation to the Floor.”

Before thanking her fellow Democratic colleagues for their ‘patriotism’, Pelosi said she is looking forward to Monday’s Caucus call.

When was Trump impeached? 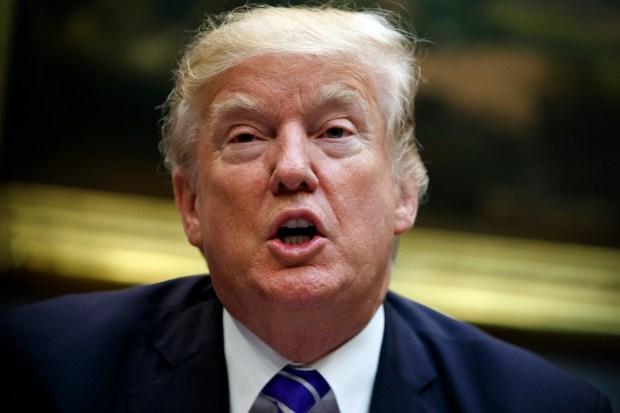 President Donald Trump become the third US president in history to be impeached by the House of Representatives.

On December 18, 2019, the House of Representatives passed two articles of impeachment against Donald Trump.

Impeachment is one of the few ways a sitting president can be ousted from the White House before an election.

On February 5, 2020, Democratic senators failed to get the necessary two-thirds majority to convict the Trump for either abusing his power or obstructing Congress.

The Senate acquitted Trump in February 2020 after the Democratic-controlled House’s impeachment trial on charges of trying to pressure Ukraine to investigate Joe Biden and his son Hunter Biden.

Trump faced unproven allegations that he threatened to withhold military aid to Ukraine unless the country launched an investigation into Biden’s son.

“Your views on the 25th Amendment, 14th Amendment Section 3 and impeachment are valued as we continue,” Pelosi added. “I am answering your communications in chronological order and will do so into the night.”

However, the chances that the president will actually be removed prior to January 20, when Joe Biden is sworn in, remain long.

Any impeachment in the House would trigger a trial in the Republican-controlled Senate, which is scheduled to be in recess until January 19 and has already acquitted Trump once before.

The House speaker’s push to get Trump impeached comes after the two have constantly clashed in the past.

Pelosi has always had an anti-Trump agenda and most recently dubbed the president as “deranged and unhinged.”

When Biden was called the president-elect by news outlets on November 7, Pelosi said that Americans decided on a “fairer, stronger” United States by electing the 78-year-old politician.

Despite Pelosi’s push to oust Trump, not everyone agrees with the House speaker’s decision.

Rioters clashed with police outside the Capitol building on Wednesday[/caption]

Republican Rep Ken Buck, along with six other GOP House members, wrote a letter to Biden in hopes he could put a stop to Pelosi’s impeachment efforts.

The letter, which Buck shared to Twitter, reads: “A second impeachment, only days before President Trump will leave office, is as unnecessary as it is inflammatory.

“This impeachment would undermine our priority of unifying Americans and would be a further distraction to our nation at a time when millions of our fellow citizens are hurting because of the pandemic and economic fallout.”

Some protesters climbed the building’s walls[/caption]

Pelosi revealed Democrats will move to impeach him again over Wednesday’s “insurrection.”

The president is reportedly considering both Giuliani, his personal attorney, and Alan Dershowitz, a controversial lawyer who has defended clients like Harvey Weinstein and Jeffrey Epstein.

Democrats have already drafted the single article for Trump’s impeachment, and it will be formally introduced on Monday.

Dershowitz told Politico on Friday that it would be his “honor and privilege” to defend Trump should he be impeached a second time.

However, the lawyer later clarified to CNN that he meant it would be an “honor and a privilege to defend the Constitution,” not Trump himself.

Trump supporters are pictured outside the Capitol Building – with American flags, Trump flags, and MAGA hats on January 6[/caption]

For impeachment to succeed, two-thirds of senators would have to vote in favor of Trump’s removal before the end of his term on January 20.

Democratic members of the House of Representatives will introduce formal articles of impeachment on Monday, Representative Ted Lieu said on Twitter.

The California Democrat, who helped draft the charges, said the articles had drawn 180 co-sponsors as of Saturday afternoon.

DON’T MESS WITH YOUR EX

The document accuses Trump of violating his Constitutional duty by encouraging a crowd of his supporters to fight the vote to certify Biden’s Electoral College victory and denounces him as a “threat to national security.”

Trump could become the first president in history to be impeached twice with the single charge of “incitement of insurrection.”

A video clip of the Capitol Hill riot appears to show when a crowd chanting “USA!” brutally attacked a cop with flags, signs, and crutches.

Immune interference – why even ‘updated’ vaccines could struggle to keep up with emerging coronavirus strains
3 hours ago
Economists: Biden’s $1,400 COVID-19 checks may be great politics, but it’s questionable economics
3 hours ago
States drop COVID-19 mask mandates but still expect people to mask up – will they?
3 hours ago
GOP stumbles give Democrats new hope in Texas
3 hours ago
Supreme Court rejects final Trump bid to nullify 2020 election results
3 hours ago
CDC: Vaccinated people can safely gather indoors without masks
3 hours ago

Immune interference – why even ‘updated’ vaccines could struggle to keep up with emerging coronavirus strains
3 hours ago
Economists: Biden’s $1,400 COVID-19 checks may be great politics, but it’s questionable economics
3 hours ago
States drop COVID-19 mask mandates but still expect people to mask up – will they?
3 hours ago
GOP stumbles give Democrats new hope in Texas
3 hours ago
Supreme Court rejects final Trump bid to nullify 2020 election results
3 hours ago
CDC: Vaccinated people can safely gather indoors without masks
3 hours ago
Will the real financial bubble please stand up?
3 hours ago
Roy Blunt won’t run for Senate seat in 2022
3 hours ago
Analysts Called The Tesla Stock Crash: Here’s What They Say Now
3 hours ago
Is Nio Stock A Buy After Massive Sell-Off From Record High?
3 hours ago
My daughter was a TV star and saved $1 million. If she buys a home and moves in with her boyfriend, will he have a claim?
3 hours ago
German lawmaker from Merkel’s conservatives quits over face mask scandal
3 hours ago