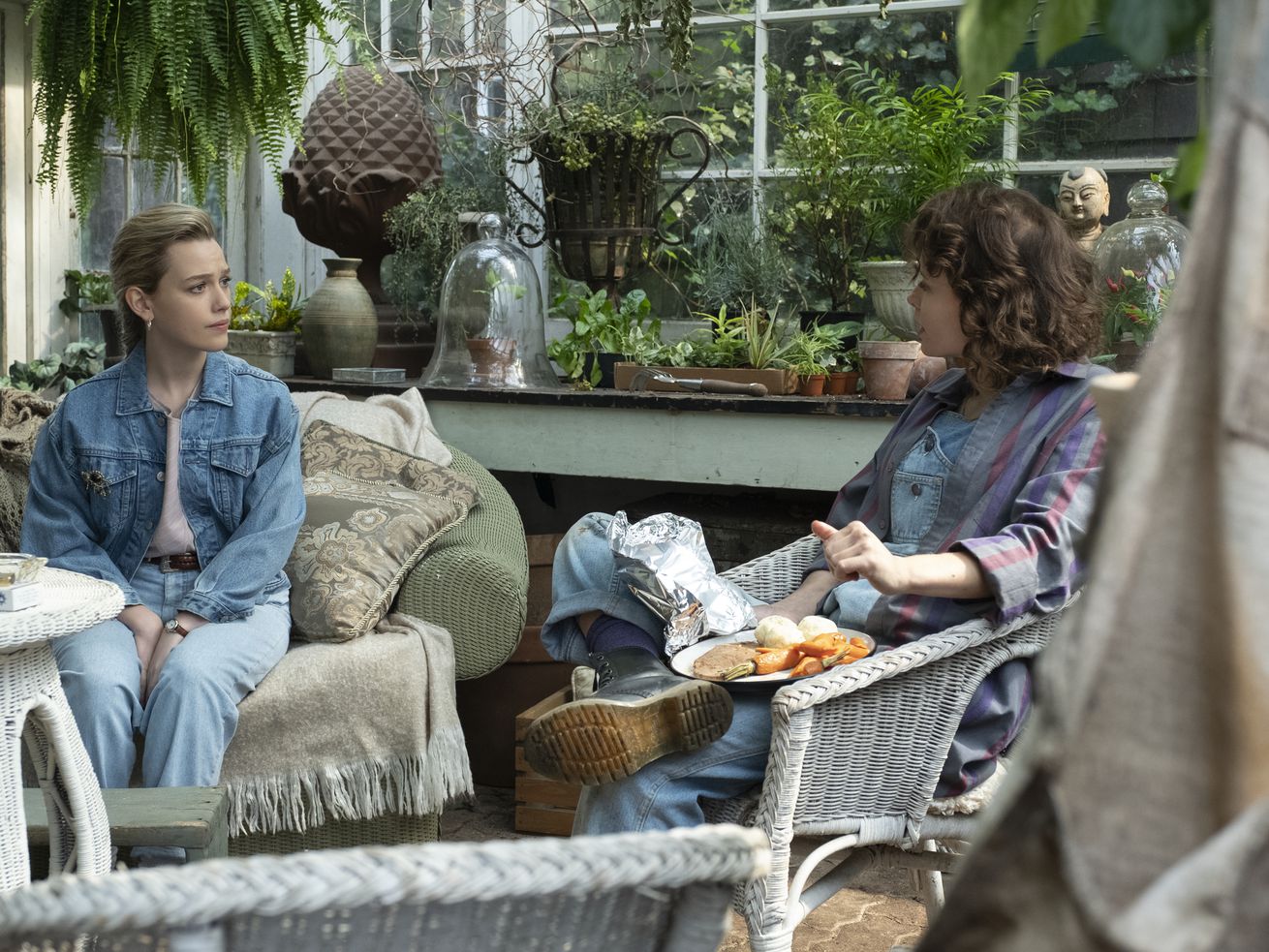 Amelia Eve and Victoria Pedretti in The Haunting of Bly Manor. | EIKE SCHROTER/NETFLIX

The ending is a touching grace note for the series.

Viewers have been eagerly awaiting Netflix’s The Haunting of Bly Manor, the standalone follow-up series to Mike Flanagan’s popular 2018 show The Haunting of Hill House. Many of them will likely devour each of its nine episodes. But if they move through the season too quickly, they might not understand what’s going on in the show’s strange final moments, when the show veers into unfamiliar territory.

Bly Manor’s finale forces viewers to re-contextualize not only a few minor characters but also the entire storyline thus far. That’s because the ending seems to shift everything that came before it — a steady gothic romance that’s loosely based on the famed Henry James novel The Turn of the Screw — into a giant metaphor and away from rather than reality.

If you were confused by the ending, don’t worry; you’re not alone. We’re here to walk you through it — so that you can decide yourself what to make of it. Is the ending even relevant to the rest of the story? Or is the ending the final turn of the screw?

Read on and make your choice!

Henry James’s original novel uses a frame narrative, which is when a storyteller in the novel sets up an entirely different story that they then proceed to narrate. The show follows this same format, introducing us early on to an unknown woman (Carla Gugino) who’s attending a wedding rehearsal dinner. Afterward, she tells the other guests the haunting ghost story that becomes the main narrative of the series.

Throughout the series, we return occasionally to the narrator, either through voiceovers or flash-forwards, reminding us that while all of the main action is taking place in a creepy gothic mansion in 1987, the narrator is recounting it all from the year 2007.

When the series opens, the unidentified woman tells us that this story isn’t hers to tell but rather belongs to someone she knew. That detail implies she must have personally known the main character, Dani (Victoria Pedretti), the governess who comes to stay at Bly Manor to look after two mysterious and retreating children, Miles and Flora. From there, things get weird — Dani and the children all see the ghosts of past residents of the manor, some with more malevolent intent than others. None of the residents and souls affiliated with Bly seem to be able to leave after they die, so the place is, to put it mildly, a bit crowded.

The penultimate episode of the series reveals that all of the malice that’s keeping souls affixed to the estate originates with one vengeful ghost, Viola (Kate Siegel), who’s become known as the Lady of the Lake. It’s not only Viola’s curse that’s murderous but also Viola herself: She has a bad habit of killing anyone who happens to cross her path when she’s on the prowl.

In the final episode, Viola mistakes Flora for her own long-lost daughter and attempts to take her into the lake in order to keep Flora’s spirit with her. (It’s not exactly clear why this moment happens when it does, since Flora’s been seeing Viola’s ghost the entire time, but that’s the magic of a convenient plot climax!)

In a last-ditch effort to save Flora’s life, Dani coaxes Viola’s ghost into her own body using a technique perfected by another ghost, Peter, in which a human can allow a ghost to share their body to a greater or lesser degree. Once Viola enters Dani’s body, her curse is instantly broken, and all of the ghosts of the manor abruptly vanish, apparently finally free to leave the manor. This part is easy to miss, since the narrator tells us that’s what happened while Dani is busy saving Flora.

Once everything settles down, the characters go their separate ways: Dani starts a new life with her girlfriend Jamie, the manor gardener, who moves with her to America. Owen the chef returns to Paris, where he opens a restaurant. The children’s distant uncle accepts his role as their caretaker. And as for the children themselves, they can’t remember anything from their time at Bly Manor.

For five years, things are good — Dani and Jamie even exchange wedding rings — but then Dani begins to sense Viola’s ghost is taking over her body, ready to resume her violent tendencies. To prevent this, she returns to Bly and drowns herself in the lake. Because Dani is now dead, she, too, may now be a ghost of Bly Manor. But because her peaceful soul is now entangled with Viola’s, Viola’s own spirit can no longer cause harm — or so our narrator reassures us.

The story could easily end here but for one obvious lingering question: Who is the narrator, and why is she telling this story?

We’re given our first hint when the final episode fast-forwards to 2007 once more. As the narrator concludes her tale, the guests press her for details: Is this story real? What about Bly Manor? She hedges, refusing to categorically confirm or deny whether Bly Manor ever existed.

Once left alone, she and the bride of the wedding party then have a short heart-to-heart about love and loss. It’s then that the bride makes an odd remark — her middle name also happens to be Flora.

The next thing we see is the wedding reception. There, the bride dances first with her groom, then with an older gentleman, while the mysterious narrator watches from a corner. Through her eyes, we view two other members of the wedding party — only we suddenly get flashbacks to much younger versions of them. Our narrator sees a much younger Owen and a 10-year-old Miles because the guests at the wedding are none other than Owen and an adult Miles, now 30, watching his sister, “Flora,” dance with their uncle.

As for the narrator, we also get a brief glimpse of her as she once was. It’s Jamie, the gardener and Dani’s true love. (To remove any ambiguity on this point, the final episode credits Gugino as playing “Older Jamie” and the other actors as playing “Older Owen,” etc.)

You might be confused by this. If the characters in the wedding party are the characters from the story, why didn’t Flora recognize herself during the narration? But remember: Flora and Miles both lost their memories of everything that happened at the manor. It seems based on her reaction that she doesn’t even remember ever living at the manor to begin with.

After the wedding, we see Jamie going home to her apartment, where she sleeps with her outer door open, as if welcoming someone inside. And someone does come — the ghost of Dani, who watches over Jamie in the final shot, still wearing her wedding ring.

This setup makes it clear that Jamie told the entire story to Flora as a kind of wedding gift, a story about love, devotion, and loss to commemorate both Flora’s own relationship journey as well as Jamie’s own lost love.

Still, the gift is not without its ambiguity. It remains possible, as Jamie cautions, that Bly Manor never existed, and that Flora, Miles, and their other story counterparts never lived there or experienced any ghostly activities at all. Perhaps Jamie made up the entire story as an allegory for Dani’s ongoing struggle with mental illness, embodied by the ghosts in her head — a reading that would be in keeping with the psychological themes of the original James novel. Perhaps Miles and Flora experienced childhood trauma of a different sort, from which their family and friends have since protected them. Or perhaps the entire story is simply a straightforward tale of love, loss, and healing, with some fictional ghosts thrown in to liven things up.

The Haunting of Bly Manor ends without filling in any of these blanks. That’s for you to do yourself as the credits roll. But one thing is consistent across all versions of the story — and that’s that love conquers all.