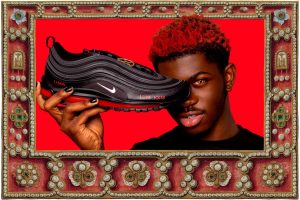 “We do not have a relationship with Little Nas X or MSCHF,” Nike told NBC in a statement. “Nike did not design or release these shoes and we do not endorse them.”

Lil Nas X issued a public “apology” which you can view below and it’s very clear how he feels about the backlash he’s received for his latest musical effort. He tweeted, “we are in a pandemic and y’all are going on day 5 of being mad at a gay nigga who don’t do none but tweet all day.”

The “Old Town Road” artist raised hell following the release of his “Montero (Call Me By My Name)” music video and the fiery kicks.

Many public figures responded to the controversial video and called for the cancellation of the Atlanta artist. But Joyner Lucas had a surprising take.

“That @LilNasX video is wild but as a artist he doing everything he supposed to do. Creating viral moments, making people talk, & creating content he already knew you was going to react to. It’s a formula guaranteed to work. I doubt he actually worships the devil,” he tweeted.

Joyner continued offering an explanation as to why so many people were up in arms. “I think the biggest problem for me is the fact he dont understand “old town road” is every kids anthem. Children love him for that record. They tuned in and subscribed to his channels. So with no disclaimer he just dropped some left field ish & all our kids seen it. Smh.”

Check the video out below and let us know what you think:

The fight for DC statehood gets its best chance yet
8 mins ago
The Supreme Court’s “cursing cheerleader” case could reshape students’ First Amendment rights
9 mins ago
The history of police killing children in America
9 mins ago
Could the solution to fashion pollution be … tiny nuclear reactors?
9 mins ago
Stocks Drop on Biden Plan to Lift Capital-Gain Tax: Markets Wrap
9 mins ago
Stock market news live updates: Stocks sink after report says Biden will propose higher capital gains tax on the wealthy
9 mins ago