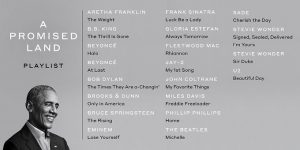 Barack Obama shared his “Promised Land” playlist that features Beyonce, Jay-Z, Sade, Stevie Wonder, Eminem, and more legendary artists. He takes it to social media by listing 20 songs on a playlist that he curated that reflects his time in the office and inspirted his book that is released today in stores.

The playlist features Beyoncé performing the legendary track “At Last” when Barack and Michelle Obama shared their first dance at the 2009 Inaugural ball.

He pays homage to his wife with the single of “Michelle” by The Beatles. The playlist includes Eminem “Lose Yourself” that was in the campaign ad with Biden.

In a tweet he states, “Music has always played an important role in my life–and that was especially true during my presidency. “In honor of my book hitting shelves tomorrow, I put together this playlist featuring some memorable songs from my administration. Hope you enjoy it.”

Peep the playlist below.

PMQs LIVE: Boris set for Commons clash with Starmer as UK faces return of Tier chaos
1 hour ago
‘Walk away now Boris!’ Britons furious as EU demands Brexit deal be reviewed in 10 years
1 hour ago
London covid cases MAPPED: Boroughs with highest rate of cases – will London go in tier 3?
1 hour ago
‘Leftist liberals’ chasing investment out of Europe, MEP rages: ‘We won’t allow it!’
1 hour ago
What’s China planning? Worrying satellite images expose huge military moves
1 hour ago
‘Significant’ find after robot probed ‘treasure tunnel’ in hunt for lost World War 2 gold
1 hour ago
‘UK will know what it feels to be alone’ Bitter MEP taunts Britain in brutal Brexit swipe
1 hour ago
Barnier panics as MEPs threaten to VETO Brexit deal over delay – ‘We will have final say!’
1 hour ago
Nicola Sturgeon ‘will defy Boris Johnson and hold second referendum without approval’
1 hour ago
We’ll hold you to that! Guy Verhofstadt vows NOT to meddle in Brexit as talks go to wire
1 hour ago
India has key role as net security provider in Indian Ocean region: MoS Muraleedharan
1 hour ago
SPECIAL REPORT- To reopen or not to reopen: That is the fraught question for U.S. schools
1 hour ago