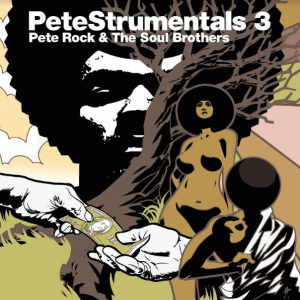 For the last 30 years, Pete Rock has produced some of Hip-Hop’s most celebrated sounds. Amid a Grammy Award-winning career that includes production, rapping, and DJ’ing, he now expands his repertoire by forming The Soul Brothers.

With his forthcoming PeteStrumentals 3 album, Pete takes one of the most trusted franchises in Hip-Hop in an organic direction. “A lot of this album sounds like samples extracted from records. We dress it up and add definition to what it is. It’s Hip-Hop, but have you ever heard Pete Rock not sample anything or work with a band? It’s exciting. I’m a musician, whether I’m sampling or not,” Pete declares. “Music is music; it’s what I think about it all day, every day.”

Today, with the release of the album’s first single, “Say It Again,” you can hear how Pete’s creations come to life with his band and all-original sound; a band that he insists maintains his trademark knock.  “This is something that I’ve always wanted to do” Pete commented to Rolling Stone.  “Being an avid digger of albums and 45s, I now have a band to study and reinterpret these records. Presenting this to the world is so fulfilling.”

Arriving on Pete Rock’s Tru Soul imprint, PeteStrumentals 3 marks a new beginning which will surely usher in a new generation of “Pete’s Treats.”