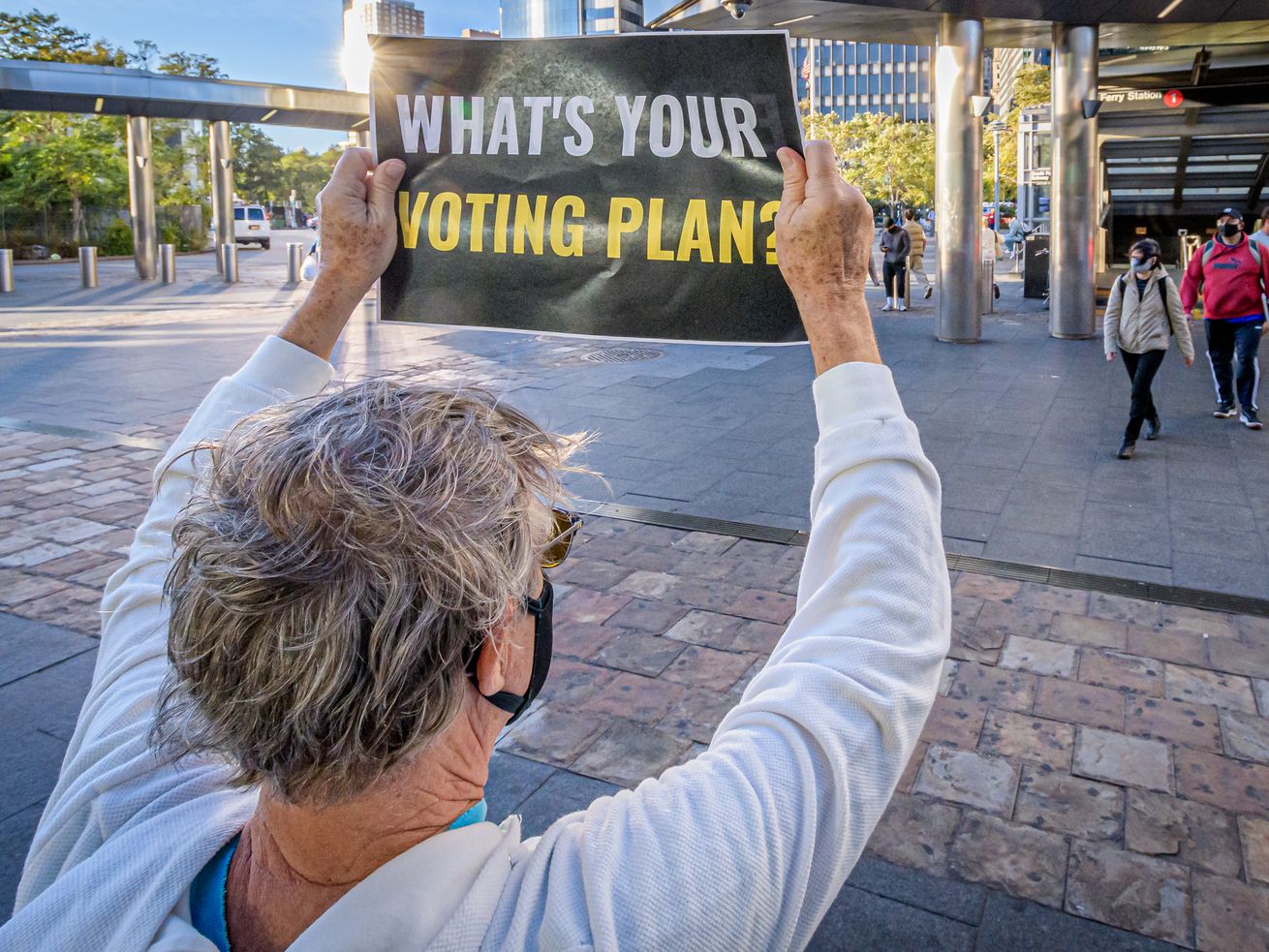 Persuasion is hard, but 61 percent of college students say they’ll speak up if people they know don’t vote.

In a new Axios poll, 61 percent of college students revealed that they would definitely or probably shame someone they know if they chose not to vote.

The poll, conducted online by College Reaction for Axios October 6-7 among 872 college students at accredited four-year universities, was specific in its wording. It asked about “someone you know [who] does not vote even though they can” — verbiage that acknowledges voting can be prohibitively difficult for people who can’t take time off work, may be forced to stand for hours in line, or have been unfairly purged from the voter rolls.

An August report from the Knight Foundation indicates that college students are uncharacteristically motivated to vote this year, 71 percent of them saying they are “absolutely certain” of it. This surge in participation from college students follows a trend reported by several outlets following the 2018 election where “turnout among college student voters more than doubled from the 2014 to 2018 midterm elections” according to the Institute of Higher Education. That enthusiasm was echoed in the Axios poll. Only 16 percent of the students said they would definitely not “address, confront, or otherwise convey disappointment” to the person who did not vote.

College students aren’t alone; “vote-shaming” in all its forms is becoming a steady fixture in American politics, from its more gentle forms like former President Obama’s famous “Don’t Boo, Vote” to the explosive aftermath of the 2016 primary when the Democratic Party desperately attempted to knit itself back together.

There has certainly been a backlash to many of these efforts. Elle magazine was heavily criticized after publishing a story ostensibly about Kim Kardashian and Kanye West separating, only to instead link interested readers to the votings rights group When We All Vote. The Washington Post detailed several other instances of vote-shaming backfires in a 2018 story, including a tweet by Billy Eichner in which he told his bellhop to vote, prompting backlash that forced him to delete the quip.

Most political conversation — about the need to vote or otherwise — is fraught in hyper-polarized 2020. But, research shows, there are ways to do it effectively.

What we know about how to have effective political conversations

The evidence is mixed on whether vote-shaming as a specific tactic works. Researchers at the Poverty Action Lab in 2007 found that vote shaming may be an effective strategy. In a study, they mailed voters a notice detailing their voter history and found that “disclosing past voting behavior had strong positive effects on voter turnout” and notably, “these effects were stronger when voters were told of a recent election in which they failed to vote.”

The mailing to one treatment group noted their failure to vote in a previous election and read “DO YOUR CIVIC DUTY — VOTE.” It also noted that the “list of who votes is public record” and “we will note whether you vote or not.” This group was 28 percent more likely to vote than people who received a nearly identical piece of mail which instead highlighted an election in which they had actually voted.

It’s not likely, though, that college students (or anyone, for that matter) are sending anonymous mailers to their friends and family about their voting behavior. And traditional political persuasion might not be the path to pursue. My colleague Dylan Matthews recently reported on findings that voters in general elections are likely not moved at all by campaign persuasion efforts like “canvassing, phone calls, direct mail, TV, online ads, or anything else under the sun.” But talking to people you know to remind them to vote might be effective, some experts say.

There are also ways to effectively change someone’s mind, at least for some people, research shows. Vox’s Brian Resnick has written extensively on “deep canvassing,” a tactic that was mired in controversy when Science retracted the initial 2014 study after the researcher was found to have falsified his data. In a turn of events, David Brookman and Josh Kalla, political scientists at UC Berkeley and Yale, replicated the original study and found that deep canvassing actually worked.

Brian explains Brookman and Kalla’s research, detailing that deep canvassing deviates from normal door-to-door canvassing by “listening nonjudgmentally … The instructions note the canvasser should ‘appear genuinely interested in hearing the subject ruminate on the question.’” More from Brian’s piece below:

“Instead of pelting voters with facts, “we ask open-ended questions and then we listen,” Dave Fleischer, the LGBTQ rights organizer who developed the technique, told me in 2016. “And then we continue to ask open-ended questions based on what they just told us.” The idea is that people learn lessons more durably when they come to the conclusion themselves, not when someone “bitch-slaps you with a statistic,” Fleischer said. It is stories, not facts, that are most compelling to people when they’re changing their minds.”

The results of this kind of intervention appear to have surprising longevity. After a 10-minute conversation, voters’ negative attitudes toward trans people were reduced for at least three months.

There are limitations: The presumption is still that it’s really hard to change people’s minds at all, let alone for a long time (Resnick notes other research showing just that). Even so, the “non-judgmental” approach of deep canvassing might be the best option for people at least open to changing their minds, as Resnick explained:

The effects of most efforts to change people’s minds on an issue, if successful at all, tend to fade over time. The impact of television ads, in particular, can fade in just a week. Deep canvassing, it appears from the research, has an effect that can last for several months.

Report: Massachusetts rarely fires state troopers, “no matter what they have done”
5 hours ago
The US is plagued by long voting lines. Here’s how other countries do it better.
5 hours ago
10 countries where you can retire on just $100,000
5 hours ago
Rowan Street’s Kopelevich: Why I Sold Box Inc (BOX)
5 hours ago
Loop Drops 6% On SEC Subpoena; Roth Sees 104% Upside
5 hours ago
GLOBAL MARKETS-Asian markets under pressure as Wall St falters, COVID-19 cases rise
5 hours ago

Report: Massachusetts rarely fires state troopers, “no matter what they have done”
5 hours ago
The US is plagued by long voting lines. Here’s how other countries do it better.
5 hours ago
10 countries where you can retire on just $100,000
5 hours ago
Rowan Street’s Kopelevich: Why I Sold Box Inc (BOX)
5 hours ago
Loop Drops 6% On SEC Subpoena; Roth Sees 104% Upside
5 hours ago
GLOBAL MARKETS-Asian markets under pressure as Wall St falters, COVID-19 cases rise
5 hours ago
Guinea opposition candidate claims victory, violence erupts
5 hours ago
Kristin Cavallari on dating, ‘Laguna Beach’ reunion and that Stephen Colletti photo
5 hours ago
Bob Saget supports Lori Loughlin ahead of prison sentence: ‘She’s a sweetheart’
5 hours ago
Toobin suspended by the New Yorker, steps away from CNN
5 hours ago
The It List: New TLC series ‘I Love a Mama’s Boy’ debuts, Sacha Baron Cohen drops politically-charged ‘Borat’ sequel, Bill Murray and Sofia Coppola reunite for ‘On the Rocks’ and the best in pop culture the week of Oct. 19, 2020
5 hours ago
Dax Shepard talks about secretly buying opiates amid recent relapse: ‘It didn’t pan out — as you would expect’
5 hours ago