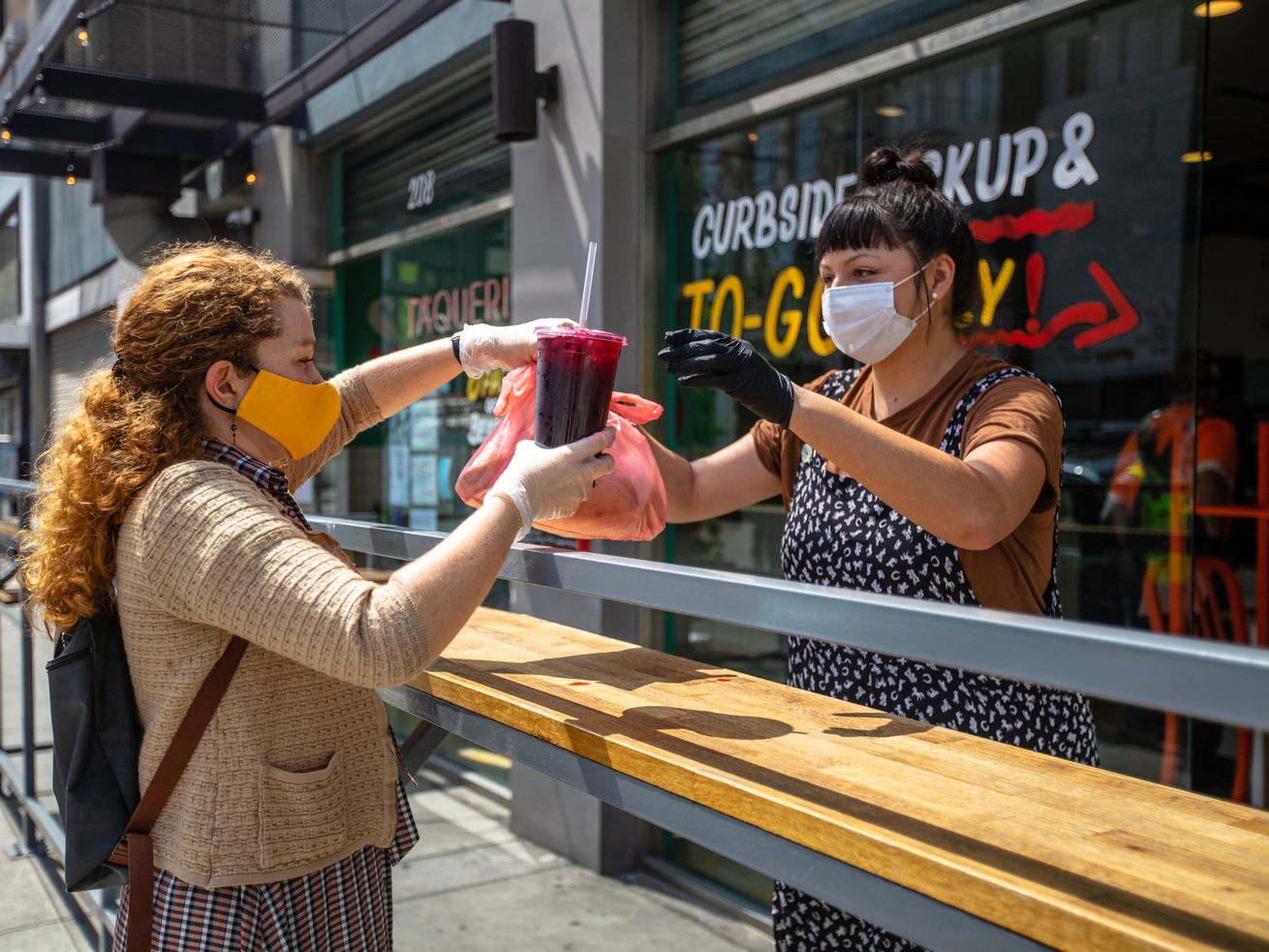 As restaurants adapt to the Covid-19 pandemic, an already precarious industry turns to crowdfunding. | Getty Images

The crowdfunding platform was a lifeline for independently owned businesses. But why?

There’s a three-block stretch in Crown Heights, Brooklyn, that contains, by my count, 19 restaurants. It’s the best: If you want margaritas and Mexican food, you can order a pitcher at a colorfully tiled table outside at Chavela’s. 95 South has the best to-go rum punch in the neighborhood. For plant-based Ethiopian, there’s Ras, which is a few doors down from Suya, a Nigerian counter joint that makes super spicy steak bowls. No weekend morning is complete without a bacon-egg-and-cheese from Bagel Pub (the best in Brooklyn, no offense).

If I sound biased it’s because I live there, on the residential street one block away. I moved in on the first of March, thrilled to be surrounded by so many places I couldn’t wait to try. It was horrible timing, of course. Two weeks later, every single one of them was closed.

Like so many small businesses all over the country, the restaurants of Franklin Avenue were left mostly helpless. On March 18, Gov. Andrew Cuomo ordered nonessential businesses to reduce their in-person staff by 50 percent. Owners faced an impossible choice: Attempt to stay open and risk the health and safety of their employees and customers, or close down, leaving everyone unemployed. By March 20, they wouldn’t have to make that choice, as all nonessential businesses were shuttered.

With no way to pay staff or rent, almost all of them turned to the internet. “I work in the service industry, and so many of my friends on my Facebook wall were sharing [links] to please donate to staff,” recalls Zhenya Kampanets, co-owner of Crown Inn, a cozy bar on the strip. “It must be a pretty overwhelming experience, seeing so many places being like, ‘Please help us, please help us’” — especially, she acknowledges, when customers might be facing financial issues as well.

The pandemic fundraising platform of choice, it seemed, was GoFundMe, which like Kickstarter and IndieGoGo is often marketed as a launching pad for startup businesses or charities. But it often ends up as a depressing reminder of where the American social safety net fails — fundraisers for insurmountable health care bills, for example, are incredibly common. “The GoFundMe homepage features fundraising pitches that hit virtually every bullet point in the United Nation’s list of basic human rights,” notes a scathing appraisal of the crowdfunding economy in Jacobin magazine. The coronavirus, naturally, was a boon for the platform, which saw its greatest demand since it launched in 2010.

Crown Inn launched its own GoFundMe page on March 20, with a $10,000 goal in which all donations would go to bartenders, barbacks, and porters. “I did feel a little conflicted about it, because I kept hearing stories about people losing their jobs and it felt a bit strange asking people for money,” Kampanets says. “You don’t know people’s situations. But I felt that if there’s anything we can do to help the people who work behind the bar, we should do that.”

GoFundMe may also be the most fundraiser-friendly of the crowdfunding platforms, not only because of its high name recognition. In 2017, it removed the platform fee, which previously allowed the company to pocket five percent of every donation. There still remains a fee of 2.9 percent plus 30 cents per donation to cover payment processing, and donors are given an option to “tip” the company when they contribute to a cause. The users I spoke with had only positive experiences on the platform, though other owners have reported difficulties with its strict identity verification system. Like almost all of its neighbors, Crown Inn only reached about one-third of its goal (crowdfunders can still access their money whether its goal is reached or not). This is common: In normal times, about 27 percent of GoFundMe campaigns hit their goal, according to researchers at the University of Rochester, but that number is likely worse now.

GoFundMe campaigns typically fare better when they’ve built a community of local or online fans. On Franklin Ave, owners told me, people are quick to rally around their favorite spots. “We had regulars who were so incredibly generous with us that it almost felt like an, ‘Oh my god, this is too much,’ type of thing,” says Kampanets. “Honestly, I was so grateful for people who were donating five or ten bucks, because that’s what they could do. We had several people who, when we reopened, came back and they said, ‘I’m sorry, I couldn’t donate, I lost my job’ but then they tipped extra once we came back. That was a really sweet thing.”

The kind gestures from regular customers were in stark contrast to how the federal and state governments were handling the crisis. “So much political infighting stalled any progress for relief, which is still frustrating,” explains Claire Sprouse, owner of the nearby all-day cocktail bar and restaurant Hunky Dory. “At the federal level, we should have had the infrastructure to handle unemployment claims. I have employees who weren’t able to collect funds for two months. It’s a major clusterfuck.” Sprouse and Kampanets were both ultimately able to receive Paycheck Protection Program (PPP) loans, though hundreds of thousands of other small businesses haven’t been so lucky.

“In the early days, it was difficult to understand whether we’re going to be able to get [the loan], how much it was going to be, or how it was going to work,” says Kampanets. “The website kept crashing, because so many businesses were applying.”

“It quickly became clear to us that businesses didn’t know where to turn,” says Samara Karasyk, the chief policy officer at the Brooklyn Chamber of Commerce. “The first round of PPP loans missed all of our small businesses, and these programs weren’t working. If you didn’t have a pre-existing relationship with the bank, they weren’t talking to you.” The Chamber of Commerce ultimately launched its own crowdfunding campaign to raise money for the Bring Back Brooklyn fund, which gives microloans to mostly minority- and women-owned businesses.

Restaurants and their employees are uniquely affected by economic slowdowns. “In an industry where a lot of the workers are from our most vulnerable communities and are living on a cash economy, that income is based on everything from the weather to the subjective experience that a person has when you serve them,” Sprouse says. “That in itself doesn’t make a great foundation for people to be able to plan for their own safety and long-term future. On top of that, you have businesses that are running on razor thin margins and dealing with expensive rent that far outweighs the cost of doing business a lot of the time.” Workers, many of whom may be undocumented or living in small spaces with others, are also often the people more likely to contract Covid-19 on the job, and be more at risk once they get it.

Pumpkin Patch Patio because why the heck not?

By April, Hunky Dory was able to give $400 to every employee who was able to receive unemployment and $1,000 to its undocumented workers who weren’t from the proceeds of its GoFundMe page, even though it only reached about a quarter of its goal. Now, Sprouse is concentrating her efforts on connecting with local restaurants. “You have the airline industry and the cruise ship industry who are getting all this assistance, because these are industries that have a history of organizing to advocate for themselves,” she explains. “We’ve been two steps behind.”

At least one of the Franklin Avenue restaurants has closed: Gladys’, a beloved Caribbean spot. Owner William Garfield told Eater that it was a combination of the coronavirus and failed negotiations with landlords that forced the closure in late June. In the early days of the pandemic, it too had set up a GoFundMe page for staff.

That businesses have to resort to GoFundMe at all is itself evidence of a larger systemic failure. Restaurants, of course, were not the only businesses turning to crowdfunding: hair salons, movie theaters, record shops, and bookstores have all launched their own campaigns. But restaurants were already in a precarious industry before the pandemic, and as Priya Krishna argues in the New York Times, “Every restaurant should be able to find a model narrowly tailored to its workers and community, so long as there is also a broader public safety net. For an industry-wide shift to take place, some government assistance will be essential.” One food industry consulting firm estimated that between 20 and 25 percent of independent restaurants will never reopen.

For now, many of the restaurants on Franklin Ave have ample outdoor seating and appear bustling and busy, albeit socially distanced. By raising its prices and incorporating gratuity and sales tax into the cost, Hunky Dory has been able to avoid losing money. But in a business where margins are already thin, no amount of customers can make up for months of closed doors and the uncertainty of winter, where in New York it’s frequently too cold to sit outside. If PPP loans aren’t made more widely available, more businesses may have to resort to crowdfunding on platforms like GoFundMe. But, as Kampanets says, “I’m hoping we don’t have to do it again.”