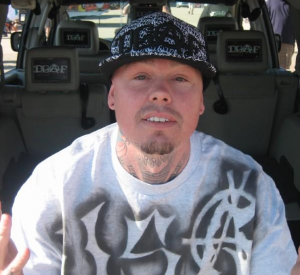 According to a report from TMZ, Saint Dog of SoCal rap collective The Kottonmouth Kings died this morning at friend’s home in Victorville, California, He was 44 years old.

Saint, whose real name is Steven Thronson, was pronounced dead at the scene after a friend called 911 when he noticed Thronson struggling to breathe. A cause of death will be determined following an autopsy and toxicology report.

The Kottonmouth Kings, which was formed in Orange County by Thronson alongside D-Loc and Johnny Richter, who rapped about their OC marijuana adventures on songs like “Suburban Life,” “Bump,” “Dog’s Life” and “Play On”. Saint Dog eventually pursued a solo career, but returned to the Kottonmouth Kings foundation to collaborate with his original crew members.

Suburban Noize Records exec Kevin Zinger gave his condolences to SD, saying, “His legacy will live on in his music and our hearts go out to his Son Max and his entire family, friends and fans worldwide.”

The post Saint Dog Of The Kottonmouth Kings Dead At 44 appeared first on The Source.