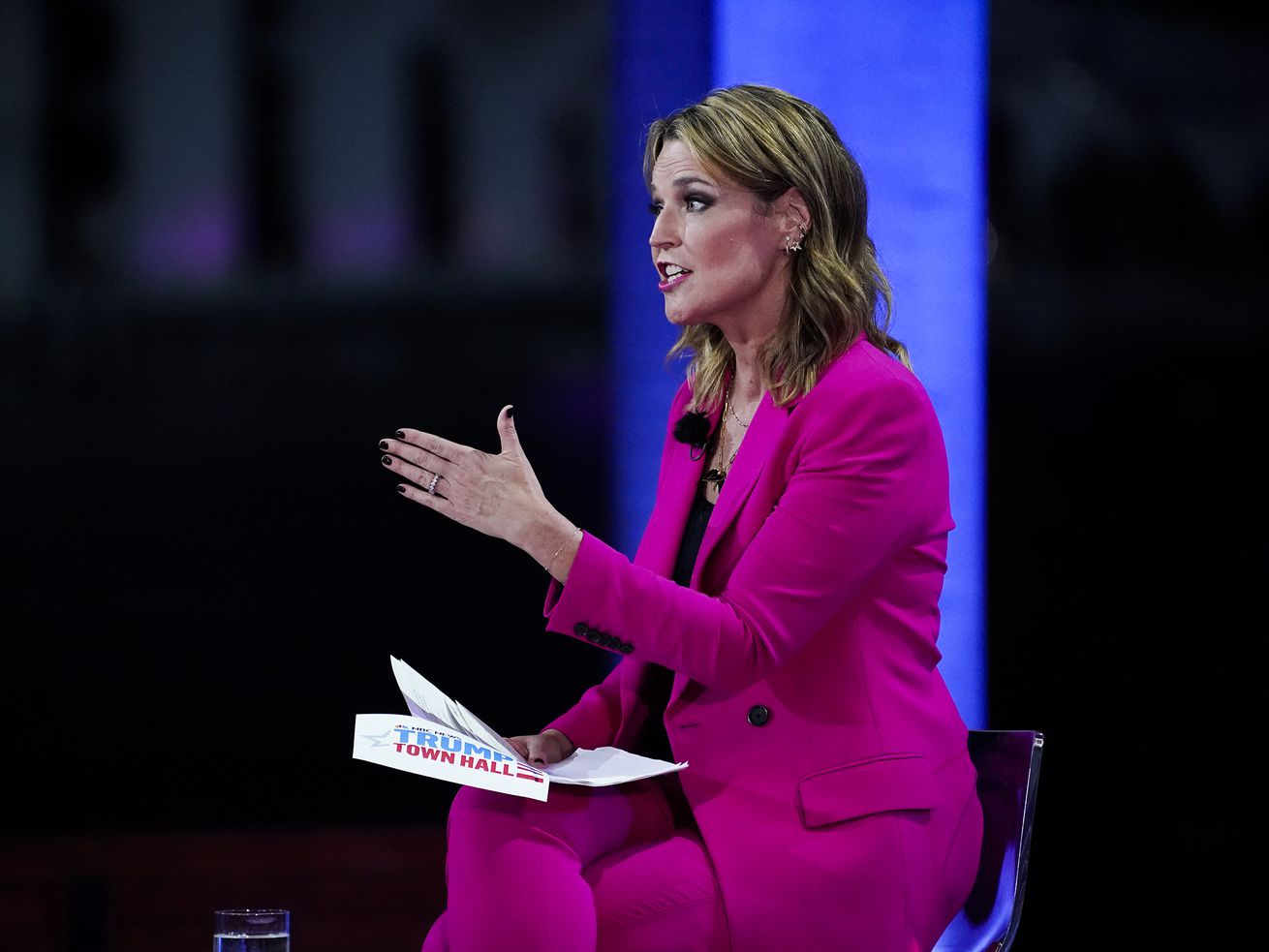 “I just told you”: Savannah Guthrie showed how to interrogate President Trump.

The Today show co-anchor tapped to moderate the president’s town hall on NBC Thursday faced an uphill climb going in — a lot of observers were upset the event was happening at all. After all, it was the president who pulled out of the originally scheduled debate in the first place. Guthrie reminded viewers of the context at the outset of the night — the president got Covid-19, the debate was changed to virtual, and then he withdrew — and then got to questioning. And she was relentless. No line of inquiry came without multiple follow-ups, no unfounded assertion was made without a pushback.

She asked the president about a White House reception for Supreme Court nominee Judge Amy Coney Barrett, the event that seems to have sparked a coronavirus outbreak among more than 20 people in the president’s close orbit and countless others.

“At this point in the pandemic, knowing what we know, shouldn’t you have known better? Shouldn’t the White House know better than to hold an event like that?” she asked.

Trump responded that there’s a lot of testing in the White House, he’s fine with masks (he didn’t wear one at the event in question), and a lot of people who wear masks get Covid-19 anyway. “Hey, I’m president, I have to see people,” Trump said.

Guthrie shot back: “You can see people with a mask though, right?”

Guthrie came in quick, she came in informed, and she came in ready. She didn’t let Trump just drone on in silence, but she also didn’t come back at him with a list of facts. She just asked him to explain himself, to really answer her question, to just say the thing that is true.

She spent the first part of the evening as a one-on-one interview with Trump before turning to the audience, asking the president the types of questions many voters have. Were you tested the day of the last presidential debate in Cleveland, which took place just two days before your positive coronavirus test? How often are you tested? Are you blaming grieving military families for giving you Covid-19? Why did it take you two days to denounce white supremacy?

.@SavannahGuthrie: “Did you take a test on the day of the debate?”

Guthrie asked the president about QAnon. In asking her question, she reminded him what it was — the dangerous conspiracy theory spreading across the internet, that sees Trump as a savior and says Democrats are behind a pedophilia ring.

“Can you just once and for all state that this is completely not true and disavow QAnon in its entirety?” she asked. “I know nothing about QAnon,” he said.

“I just told you,” she responded.

Guthrie also asked the president about something he retweeted suggesting that Biden had a Navy SEAL team killed to cover up that the death of Osama bin Laden was faked. (This is not true.)

“That was a retweet, that was an opinion of somebody,” Trump said.

“You’re the president, you’re not someone’s crazy uncle where you just retweet whatever,” Guthrie said.

At one point in the evening, a woman in the audience asked the president about the corporate tax rate, which the tax cut bill he signed into law in 2017 reduced from 35 percent to 21 percent. She asked: How does that help ordinary people? Trump bragged about the economy pre-Covid-19, and said it was rebounding, despite evidence the recovery is slowing, and promised a middle-income tax cut package should he be reelected. (It’s something he tends to do whenever voting comes around.)

Guthrie took the opportunity to ask a follow-up question about Trump’s own taxes and bring up the New York Times report of his tax returns that revealed enormous amounts of debts and losses, and that the president barely pays any federal income taxes at all. Trump told her the $400 million in debt he has isn’t that much “compared to all the assets that I have, all of these great properties” and yet again declined to release his tax returns publicly.

“You could clear this up tonight by just releasing your tax returns yourself,” Guthrie said. Trump didn’t take her up on the offer.

.@SavannahGuthrie: “You could clear this up tonight by just releasing your tax returns yourself.”

President Trump: “As you know, I’m under audit.”

Savannah: “The IRS says that doesn’t stop you from releasing.” #TrumpTownHall pic.twitter.com/tpg3iOKf8X

This presidential debate season (or what little there has been of it) has not been great for moderators — both Fox News’s Chris Wallace and USA Today’s Susan Page struggled to keep a handle on things during the presidential and vice presidential debates. It also shouldn’t be lost on anyone that Guthrie’s performance lands four years after her former colleague, Matt Lauer, who was fired from the Today show over sexual harassment claims, delivered a disastrous performance at his own presidential forum, featuring Trump and Hillary Clinton.

NBC was widely panned for its decision to host the Trump town hall on Thursday at the same time as Biden, and accused of kowtowing to the president for ratings. And ahead of the event, the president seemed to already be setting the stage for claiming the network wasn’t playing fair, even though this was an arrangement very much of his own making. Soon after the town hall aired, Trump’s campaign released a statement saying that the president had “soundly defeated” Guthrie.

Guthrie is a familiar face in millions of American households — after all, she hosts a show that is a staple across the country. She had the president of the United States on his heels during much of the evening, not because she was overly aggressive but because she was hyper-inquisitive. Her strategy wasn’t complicated, it was honest.

Sometimes, we forget the questions Trump won’t answer are easy ones. Guthrie reminded us of that.

Kate Middleton and William share emotional moment with new TV friend during latest outing
29 mins ago
Royal Family BANNED from singing national anthem on Remembrance Day over COVID fears
29 mins ago
UK weather forecast: Met Office issues ‘danger to life’ warning as Storm Aiden strikes
29 mins ago
Police make arrests as FURIOUS Muslims protest against French Muhammed cartoons in London
29 mins ago
Anti-lockdown riots explode across Europe – police attacked in Burgos and Florence
29 mins ago
Coronavirus horror: Boris Johnson to announce second NATIONAL LOCKDOWN next week
29 mins ago
Rishi Sunak’s ‘vital lifeline’ for Britons in the run up to Christmas
29 mins ago
Spain in chaos: Police RUN OVER protestor in Barcelona as angry locals launch SMOKE BOMBS
29 mins ago
SNP civil war: Humiliation as ‘Plan B’ for Scottish independence shut down by OWN party
29 mins ago
EU sues UK in bizarre legal threat – outrageous letter demands UK play by Brussels rules
29 mins ago
What Day of the Dead tells us about the Aztec philosophy of happiness
29 mins ago
What it’s like to lose a presidential election
30 mins ago