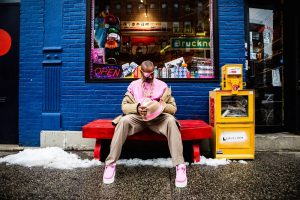 Legendary Hip-Hop storyteller Slick Rick is going on a journey with Clarks Originals, which has launched with a mini-documentary that was curated and conceptualized by The Ruler himself.

The mini-doc is called “Mind-Body-Sole” and focuses on Slick Rick’s long-standing relationship with the footwear brand. The visual is directed by Katherine Mateo of PURRRR and shot by Jordan Riggs and No Ledge Productions follows Slick Rick around landmark locations synonymous with his upbringing in the Bronx, New York. The conclusion of the doc brings The Ruler to the garment district of Manhattan, which influenced Slick Rick’s love for fashion, art, and design.

During the documentary, Slick Rick speaks about his relationship with Clarks Originals, highlighting the Wallabee, a shoe that he has been wearing and customizing since taking over Hip-Hop since the early 1980s. Urban culture equates Slick Rick’s early personalization of the Clarks Wallabee with the success of the shoe; in this visual, Rick discusses the root of his affinity with Clarks in hopes that his personal style and unique approach continue to inspire others to chase their dreams and follow in his footsteps.

The documentary nears an end in the Bronx with Slick Rick making a stop at the borough’s military recruitment office. The doc was filmed during the holiday season, allowing for Slick Rick to give holiday cheer to those who he feels are overlooked and underappreciated. Slick Rick would gift Clarks Originals to show his appreciation for their contributions to society.

Slick Rick will continue to work with various groups in this capacity through his newly launched “Victory Patch Foundation.”

Joe Biden’s inaugural address gives hope to the millions who stutter
3 hours ago
Trump’s big gamble to gut US power plant emissions rules loses in court, opening a door for new climate rules
3 hours ago
Fauci makes the Biden administration’s debut at the WHO
3 hours ago
Tech platforms banned Trump. Now what?
3 hours ago
Why scientists are more worried about the Covid-19 variant discovered in South Africa
3 hours ago
The uneasy comforts of Joe Biden’s inauguration TV special
3 hours ago