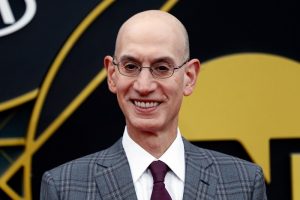 The NBA All-Star team has started to be named, participants in the special events are being chosen and commissioner Adam Silver hit The Jump on ESPN to detail the decision to play the game. In conversation, Silver said it was the “right thing to do.”

“It’s a global event for us, and we’re making our best efforts to embrace all aspects of our league to the extent we can through this pandemic and this is just one more opportunity,” said Silver. “I’ll add that of course I’m listening to those who don’t think it’s a good idea, and I think that’s been the cases in terms of essentially everything we’ve done since we shut down [nearly] a year ago because of the pandemic.”

Those who don’t think it is a good idea are Western conference captain LeBron James, in addition to presumed East All-Star James Harden. Sacramento King De’Aaron Fox also disagreed with the decision. When speaking about the matter, Silver let fans know that he considered those factors, as well as no fans being in the building.

Along with the game being played, the NBA will donate over $2.5 million to historically Black colleges and universities, while also helping COVID-19 relief.

The post SOURCE SPORTS: Adam Silver Says NBA All-Star is “Right Thing to Do” appeared first on The Source.