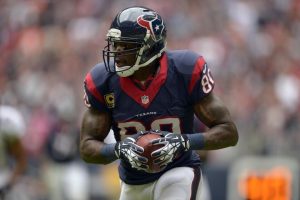 Deshaun Watson seems frustrated with the Houston Texans as a franchise overall. Unfortunately, he isn’t the first Texan great to express his displeasure with the franchise.

Former Texans wide receiver Andre Johnson took to Twitter on Tuesday to rip the Texans. Johnson, a seven-time Pro Bowler, said he would “stand my ground” if he were in Watson’s position. He also blasted vice president of football operations Jack Easterby and said only bad things have happened in Houston since Easterby was hired.

Johnson’s condemnation of the team with which he spent 12 seasons (and only four playoff games) was soon endorsed by the Texans’ two biggest departures from last season, wide receiver DeAndre Hopkins and nose tackle D.J. Reader.

The Texans have a track record of former stars being unhappy on the way out. Watson hasn’t flat out said he wants out but the situation seems to be deteriorating day by day.

The post SOURCE SPORTS: Andre Johnson Slams Texans for How They Handle Star Players Like Deshaun Watson appeared first on The Source.

Sign up for the Weeds newsletter
4 hours ago
Fauci threw a lot of shade at Trump in his first comments as a Biden adviser
4 hours ago
BRH Wealth case: HDFC Bank says Sebi orders depositing over Rs 158 cr in escrow account
4 hours ago
Hosting ‘Jeopardy!’ has been ‘nerve-racking,’ Ken Jennings says: ‘I wish it was still Alex out there’
4 hours ago
‘Bachelorette’ star Clare Crawley breaks silence on Dale Moss split: ‘I am crushed’
4 hours ago
The Britney Spears Conservatorship Situation, Fully Explained
4 hours ago