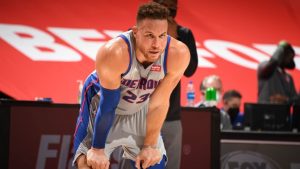 We have seen the last of Blake Griffin in a Detroit Pistons uniform. The former all-star power forward and the Pistons have reached an agreement to pull Griffin from the lineup until a resolution is met.

The Pistons will now look toward trade Griffin. Another option for the Pistons and Griffin would be a buy out of the remaining contract.

“After extensive conversation with Blake’s representatives, it has been determined that we will begin working to facilitate a resolution regarding his future with the team that maximizes the interests of both parties,” Pistons general manager Troy Weaver said to ESPN. “We respect all the effort Blake has put forth in Detroit and his career and will work to achieve a positive outcome for all involved.”

Showing the amicable nature of the split, Griffin also released a statement: “I am grateful to the Pistons for understanding what I want to accomplish in my career and for working together on the best path forward.”

Griffin is owed $36.6 million for this season and an additional $39 million for next year.

The post SOURCE SPORTS: Blake Griffin Pulls From Pistons Lineup in Hopes of Trade appeared first on The Source.