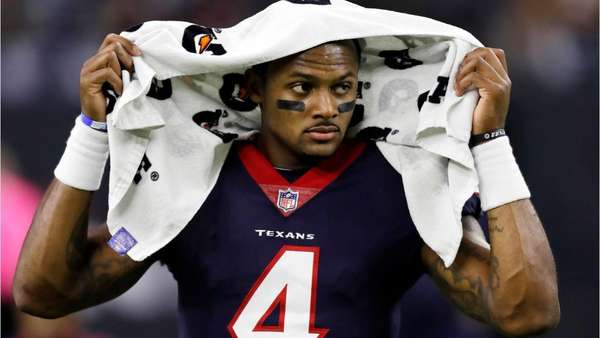 Deshaun Watson isn’t too happy with the Houston Texans as an organization overall.

The Texans this week hired Nick Caserio as their new general manager. According to NFL Media’s Ian Rapoport, Texans owner Cal McNair told Watson that the franchise quarterback would be involved in the hiring process. Rapoport says Watson is upset because he did not get included.

Watson has been frustrated with the organization for a while. Last offseason, Houston didn’t let Watson know that All-Pro wide receiver DeAndre Hopkins would be traded, which led Watson to lose his number receiver and saw the offense struggled all season long.

Watson is not upset about Caserio being hired. Rather, he is upset that he was told he would have a role in the hiring process but then he wasn’t included. For that reason alone, Watson may feel his opinion isn’t valued within the Texans organization and with that, you get distrust.

Watson is arguably one of the top five quarterbacks in the NFL today. He is fresh off leading the NFL in passing yards and this is with losing Hopkins. The Texans should try to keep their franchise quarterback happy and in great favor.

The post SOURCE SPORTS: Deshaun Watson Not Happy With The Way The Texans Are Conducting Business appeared first on The Source.

The problem with India’s ‘love jihad’ laws
45 mins ago
Expert in fluid dynamics explains how to reduce the risk of COVID-19 airborne transmission inside a car
45 mins ago
Death threats and intimidation of public officials signal Trump’s autocratic legacy
46 mins ago
Senate GOP boxes itself in on impeachment
46 mins ago
FBI steps up efforts to build conspiracy case in Capitol riot
46 mins ago
4 reasons we’re seeing these worrying coronavirus variants now
46 mins ago
Court refuses to pass order on jailed activists’ plea for books
46 mins ago
Polish ruling restricting abortion to take effect on Wednesday
46 mins ago
QUOTES 3-No let up in short squeeze, retail frenzy forces funds to cover
46 mins ago
Suga says he and Biden agree to strengthen U.S.-Japan alliance
46 mins ago
Slovakia Holocaust survivors get COVID-19 vaccine on Remembrance Day
46 mins ago
Violence aftermath: Prominent farmer leaders, Medha Patkar named in FIR; 2 unions withdraw from stir
47 mins ago