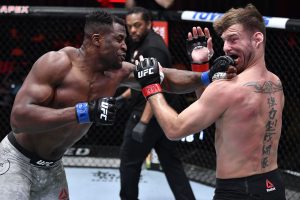 There is a new kingpin in the UFC’s heavyweight division and his name is Francis Ngannou. Ngannou knocked out Stipe Miocic in the second round of their fight, avenging a loss to Miocic in 2018. Ngannou (16-3, 12 KOs) is now the UFC Heavyweight Champion. Ngannou caught Miocic with big left hands twice in the second round. The first knocked Miocic into the cage and led to plenty of follow-up damage. Then about 10 seconds later, Ngannou dropped Miocic for good with a huge left.

Jon Jones has moved up from light heavyweight to heavyweight and would love the first shot at Ngannou. Only he has one message: meet my price tag.

During the post-fight press conference, UFC President Dana White said that if he were Jones, he’d flee to 185 pounds after witnessing Ngannou’s KO. Jones responded to it, writing, “Go to 185? I didn’t gain all this weight for no reason.”

Jones is considered the best pound for pound fighter in the history of the UFC. If he wants Ngannou, that will be the sports’ biggest fight ever.