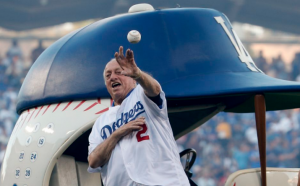 The entire baseball world is saddened that legendary Los Angeles Dodgers manager Tommy Lasorda has died from sudden cardiopulmonary arrest in his home in Fullerton, CA. He was 93 years old.

Known for his aggressive temperament which helped lead the Dodgers to two World Series titles, four National League pennants, and eight-division crowns. He was named NL Manager of the Year twice and won 1,599 career games between 1976 and 1996.

His number 2 jersey was retired by the Dodgers when he was inducted into the Hall Of Fame in 1997. In 2009, Lasorda had his portrait hung in the Smithsonian Institution’s National Portrait Gallery.

Born September 22, 1927, Lasorda began his baseball career in 1945 at only 18 years old with the Phillies organization, close to his native Norristown, PA roots. He was selected in 1948 by the Brooklyn Dodgers in the minor league draft where he stayed with the Dodgers organization until his retirement. He also pitched for the Kansas City Athletics in 1956, but he never played in the big leagues again after that season. He retired from pitching in 1960.

Lasorda is survived by his wife of 70 years and his tow children.