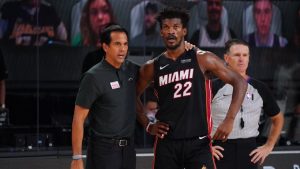 The legend of Jimmy Butler continues to grow in the NBA Finals.

Butler played in 47 of 48 minutes in the game and recorded a triple-double with 35 points, 12 rebounds, and 11 assists in a 111-108 victory against the Los Angeles Lakers to extend the series to a game 6.

Butler logged more minutes in the game than anyone else on the floor. He left everything he had on the court, and after the game, it showed.

Butler could be seen having a difficult time walking after talking to the media. Butler and the Heat are showing LeBron James and the Lakers that they will not go down without a fight.

The stage was set for a Laker’s championship coronation, especially with the team wearing the Black Mamba jerseys honoring Kobe Bryant, but the Heat looked at all of that as motivation for themselves.

Game 6, will be played on Sunday night. Expect Butler and the Heat to leave everything they got on the floor again.

The post SOURCE SPORTS: Jimmy Butler Could Barely Walk After Leaving It All On The Court During The Heat Game 5 Finals Victory appeared first on The Source.